With all of the hype surrounding Game of Thrones, tourism in Croatia has seen a major boom. Dubrovnik is struggling to keep up with the demand, and the city has recently limited the number of visitors to the Old Town each day. Other high profile Game of Thrones filming locations have felt the crush as well, but the crowding doesn’t stop fans from coming. Here are the best Games of Thrones Croatia film locations you won’t want to miss. 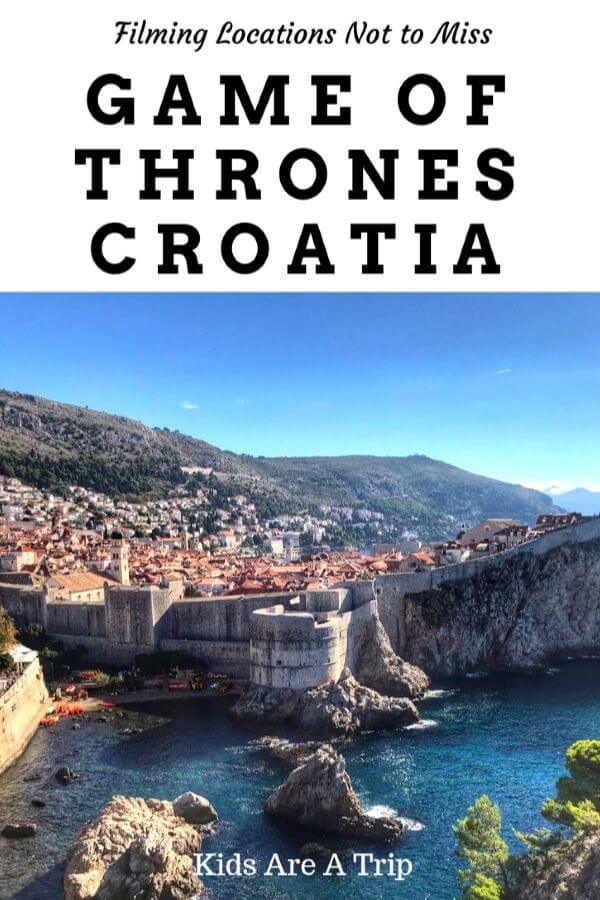 The Game of Thrones tour Dubrovnik can start anywhere. We recommend the Stradun (aka Placa) located in the heart of the Old Town. It’s hard not marvel at the city’s polished limestone promenade surrounded by medieval buildings on either side. Kings Landing is all around you and there are familiar locations to be found on every corner.

Near the eastern entrance to Old Town, next to the 15th century clock tower, is the Rector’s Palace. This gorgeous building was a stand-in for Qarth when Daenerys Targaryen asks the Spice King if he will provide ships for her army. 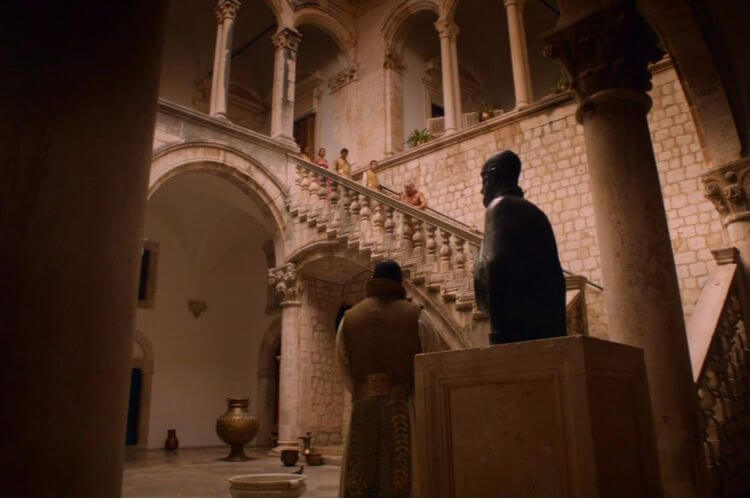 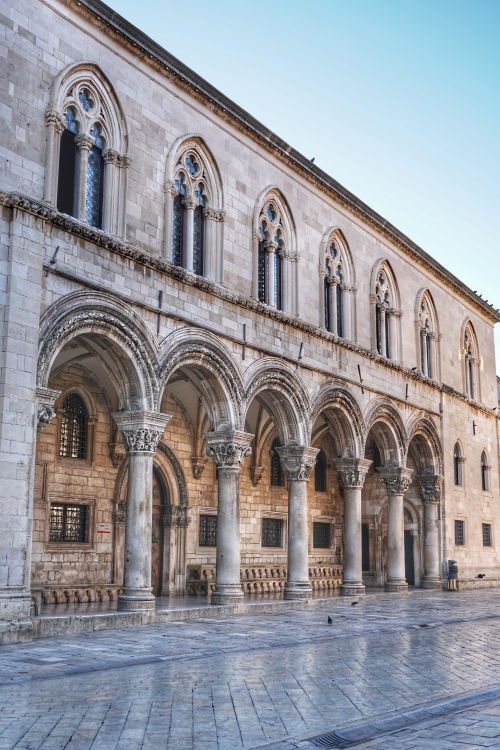 The Rectors Palace is beautiful inside and out.

Quite possibly one of the most famous Game of Thrones scenes, the Jesuit Steps were the site of Cersei’s walk of shame. Just below the Church of St. Ignatius, it’s hard to miss these famous stairs. You will find many tourists on these steps trying to re-create their own walk of shame. 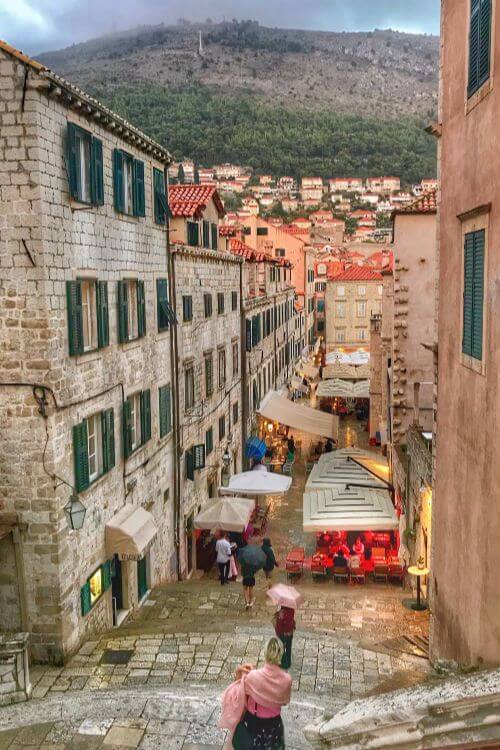 The eastern entrance to Old Town Dubrovnik, the Ploče Gate doubled as the Red Keep Gate Cersei walked through after her walk of shame. 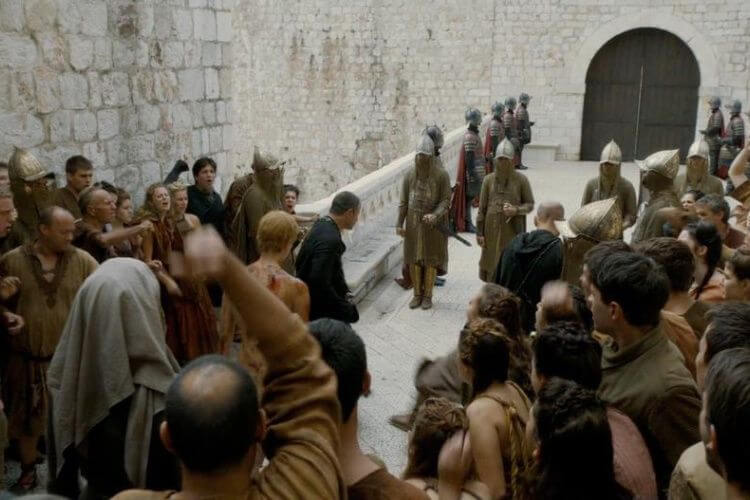 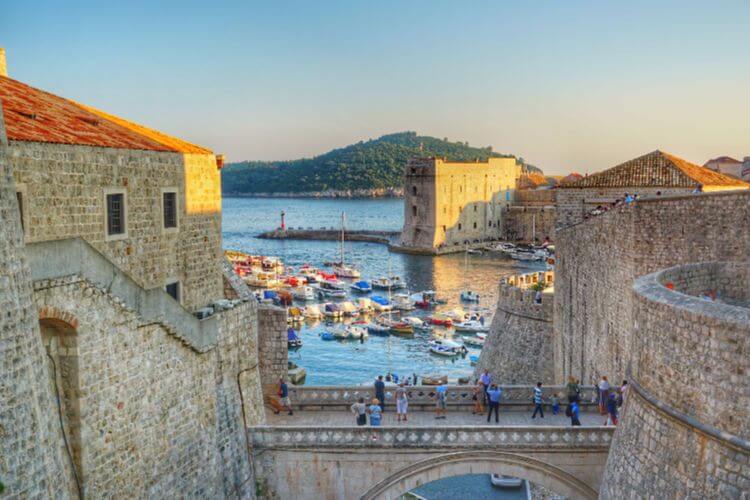 Many of Kings Landing market scenes were shot on St. Dominic street, but it was also where the Gold Cloaks killed one of King Robert’s illegitimate sons. Side note: Don’t miss going inside the Dominican Monastery to see one of the world’s oldest operating pharmacies (dating to 1317) and be sure to buy some of their famous face and eye cream as a souvenir. 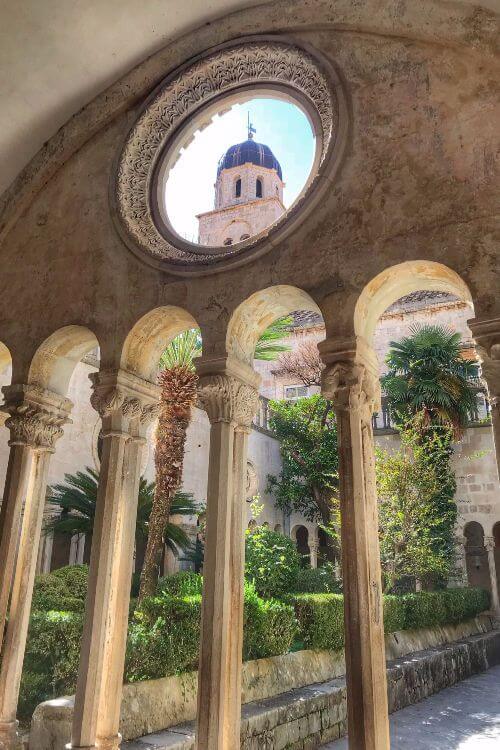 After seeing the scenes outside, make time to go inside the Dominican Monastery in Dubrovnik.

This is the western entrance to Dubrovnik’s Old Town, where Joffrey was attacked by a starving angry mob as he shouts “Just kill them, kill them all.” 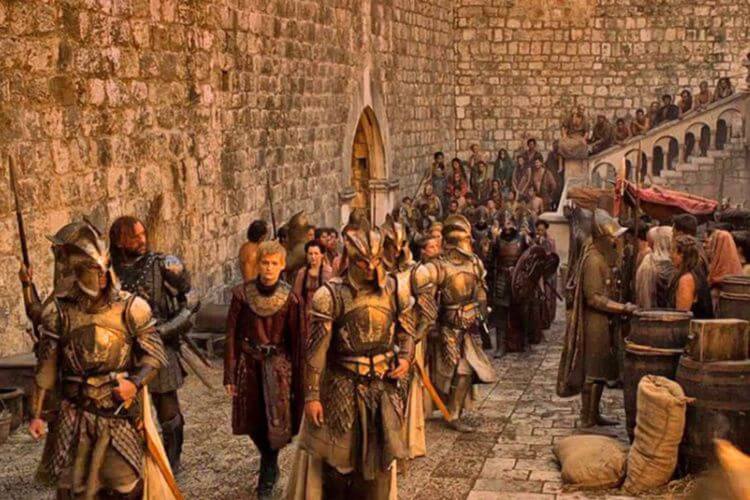 It’s a steep walk to the top of the fort, but worth it for a visit to the Red Keep. Overlooking Pile Bay (aka Blackwater Bay), the Fort was used for filming the tournament celebrating Joffrey’s name day and conversations between Cersei and Littlefinger in seasons 2 and 3. 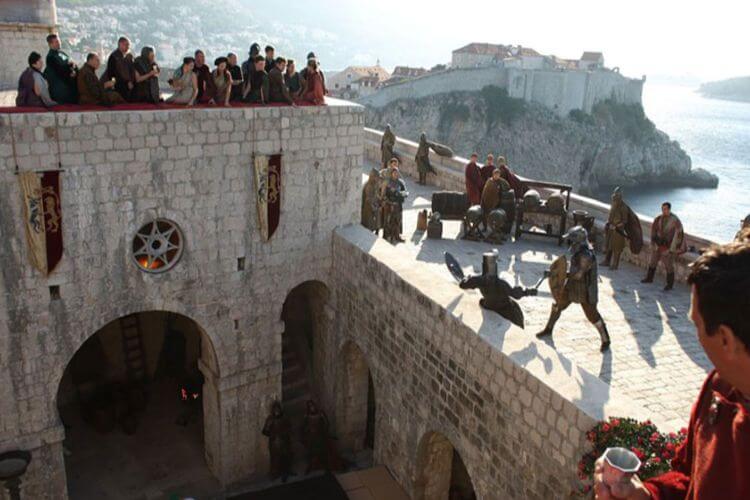 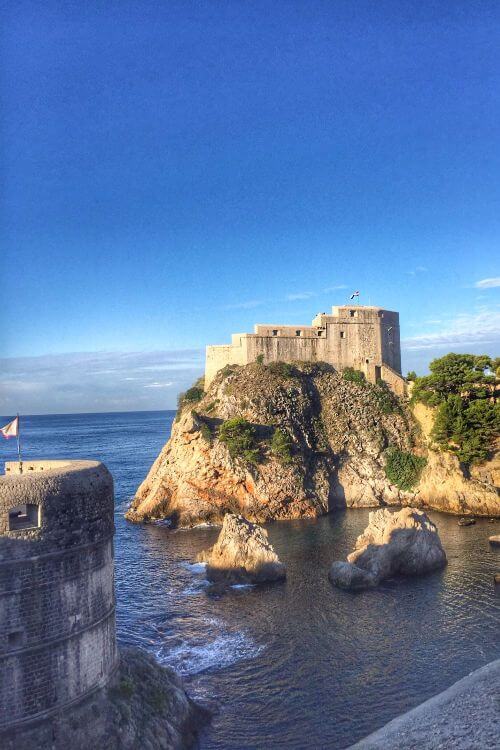 Fort Lovrijenac on the other side of Pile Bay (aka Blackwater Bay) with Bokar Fortress (see below) on left.

If you walk Dubrovnik’s city walls, you’ll find plenty of places where Game of Thrones was filmed in Dubrovnik. Scenes were filmed along the sea walls, the Bokar Fortress (where Tyrion and Lord Varys discussed how to defend King’s Landing), and the Minčeta Tower, the highest part of the wall overlooking the city. This doubled as the House of the Undying when Daenerys comes looking for her stolen dragons. 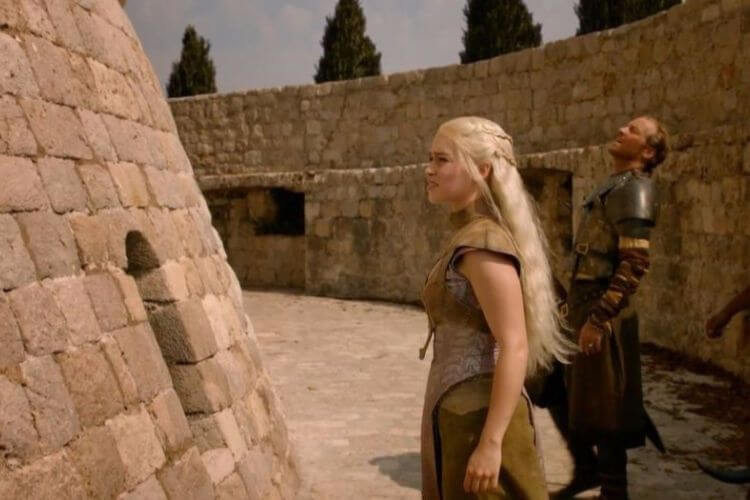 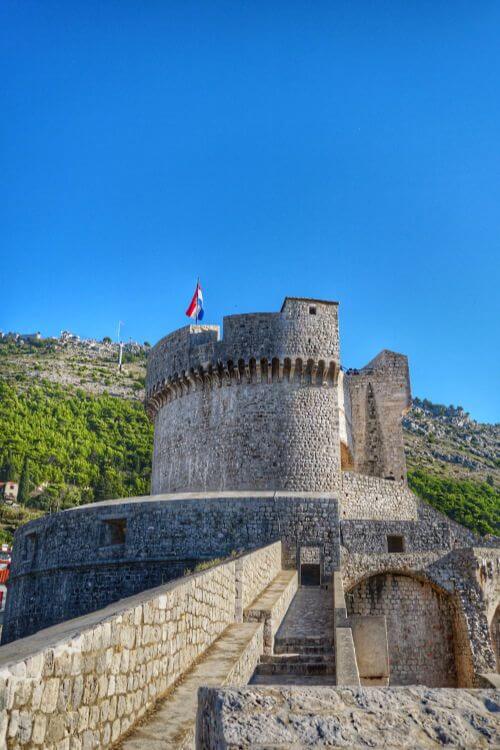 The Minčeta Tower is the highest point on the Dubrovnik town walls.

The harbor below Fort Lovrijenac is Blackwater Bay. This is where the filmed the Gold Cloaks going from house to house collecting Robert Baratheon’s bastard children. King Joffrey had ordered they be killed to protect his throne. It’s also home to the pier where Sansa and Shae are watching the ships arrive when Petyr Baelish comes to tell Sansa he’s going to return her to her family. 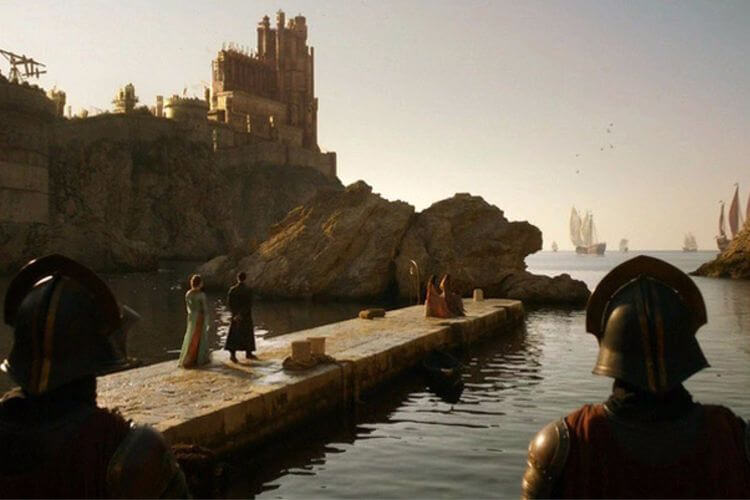 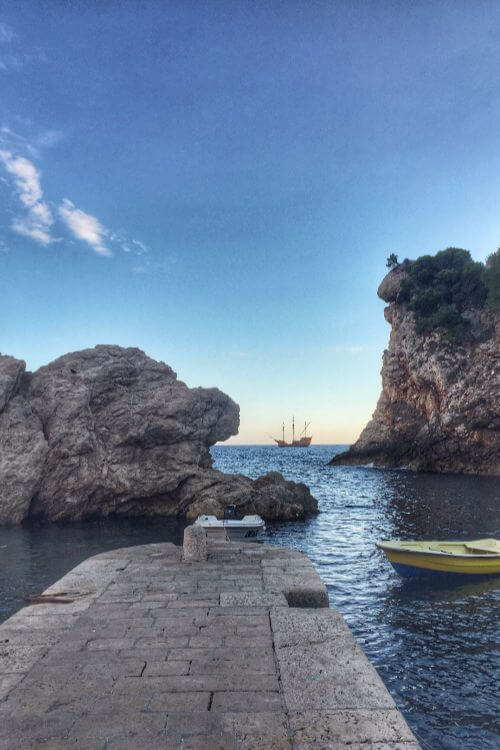 Take a quick 15 minute ferry ride from Dubrovnik’s old port to Lokrum, home to the original Iron Throne. The island is enchanting with its Benedictine monastery and free roaming rabbits and peacocks. Lokrum was used to for scenes featuring the city of Qarth in the Game of Thrones. 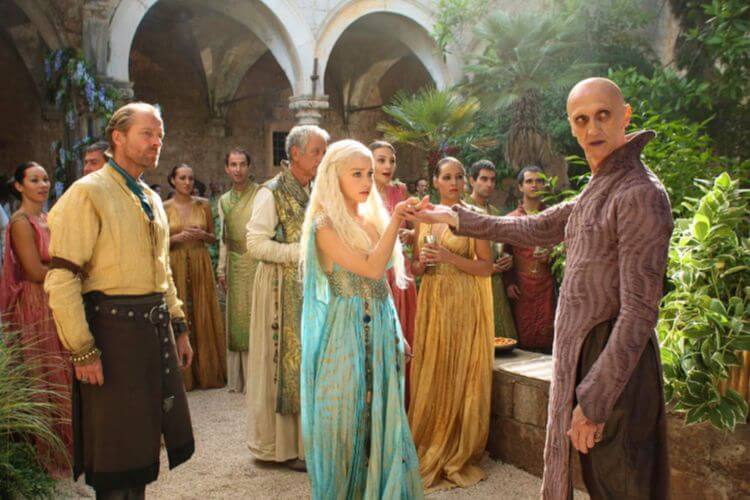 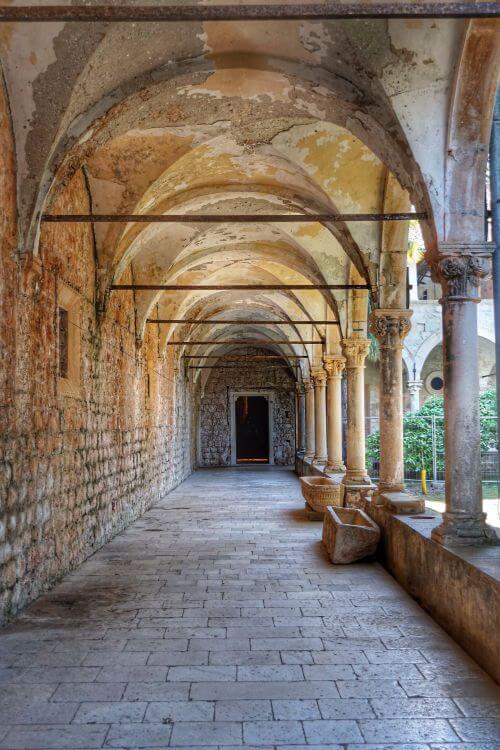 Lokrum Island is a perfect escape from Dubrovnik and home to the original Iron Throne.

It’s difficult to see the Game of Thrones scenes filmed at Grand Villa Argentina unless you are a guest of the hotel. Luckily, we booked a room here, not knowing its connection to GoT. In season 5, this is where Tyrion and Varys meet after Tyrion escapes to Pentos. The terraces at the hotel were used to film the Pentos coastline. 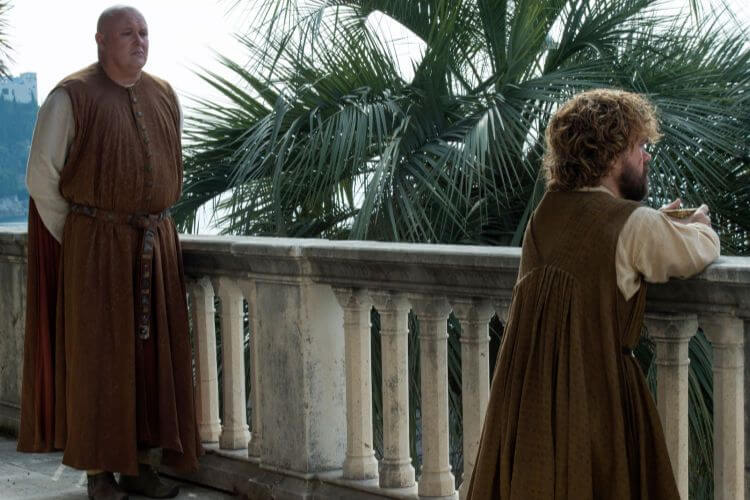 Diocletian’s Palace is the ultimate place for a Game of Thrones tour in Split. The palace’s basements were Daenerys’ throne room and where she kept her dragons. Several other scenes were shot in and around the palace, so a Split tour guide can help point out all of the important locations. 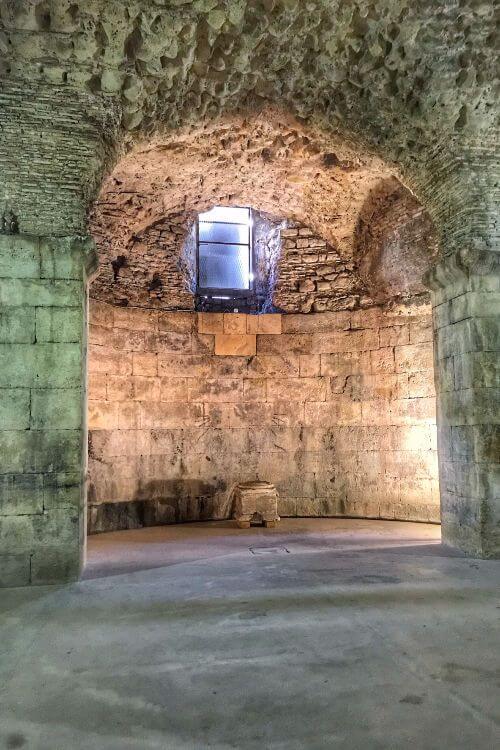 The basement of Diocletian’s Palace.

This is the scene of the Meereen slave uprising in season 4. 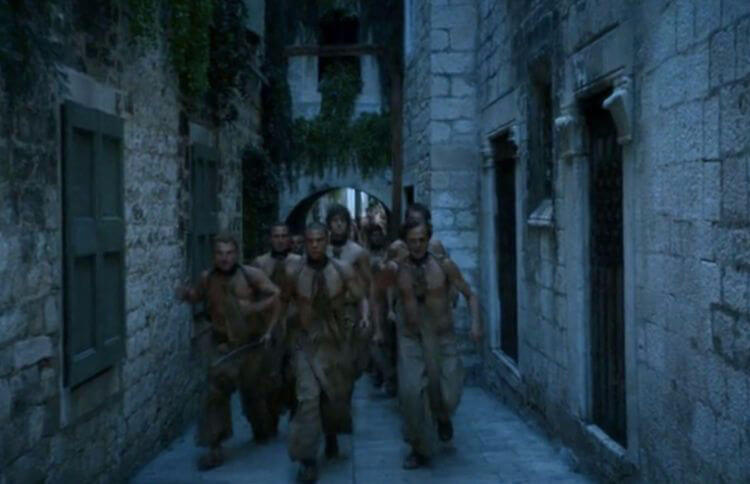 It looks just a bit different during the day…

About twenty minutes away from Split is Klis Fortress. This was Meereen, the city captured by Daenerys and her army in season 4. 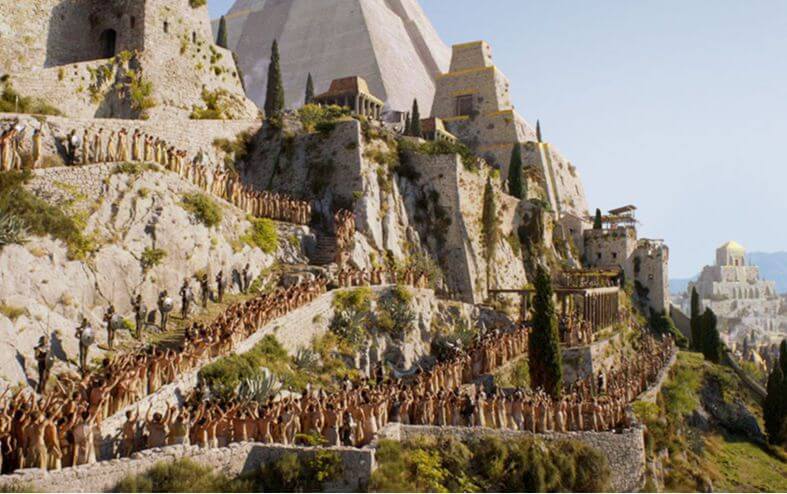 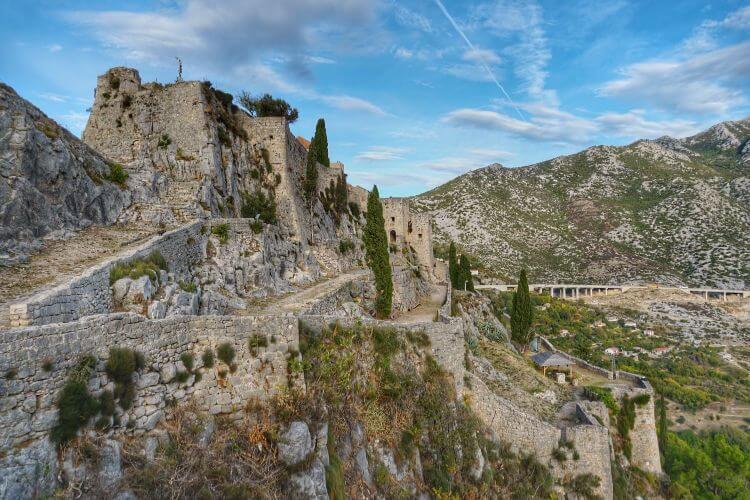 Amazing what technology can do.

Trogir, Croatia is a quick half hour drive from Split. The beautiful town is a must stop when visiting the area for its beauty alone. St Dominic monastery is the location for several Game of Thrones scenes and the city is the trading harbor of Qarth where Daenerys’ dragons were imprisoned. 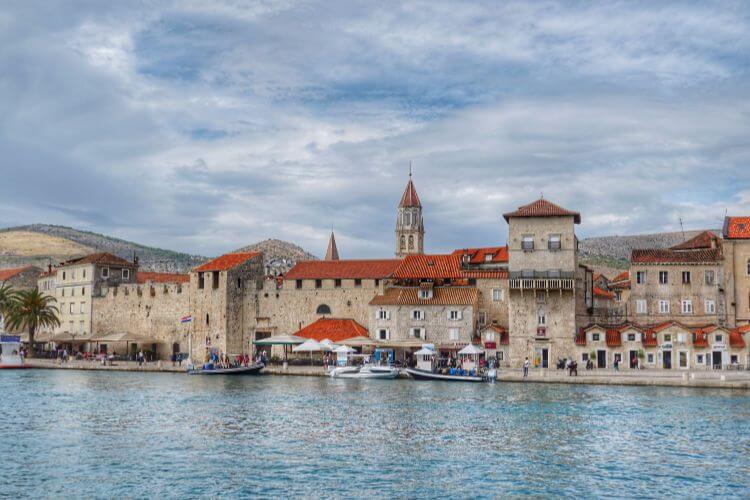 Trogir is an easy day trip from Split.

Looking for other Croatia articles? Here’s What to Do at Plitvice National Park, Dubrovnik Day Trips, and Best Things to Do in Dubrovnik.