Planning a trip to New Zealand is at the top of my bucket list. Thankfully I can live vicariously through our contributor, Heidi Gollub, who took her family on a New Zealand road trip this past summer. Heidi’s sharing the best places to visit on a New Zealand vacation from the North Island to the South Island and everywhere in between. Use her New Zealand itinerary to help plan your trip. 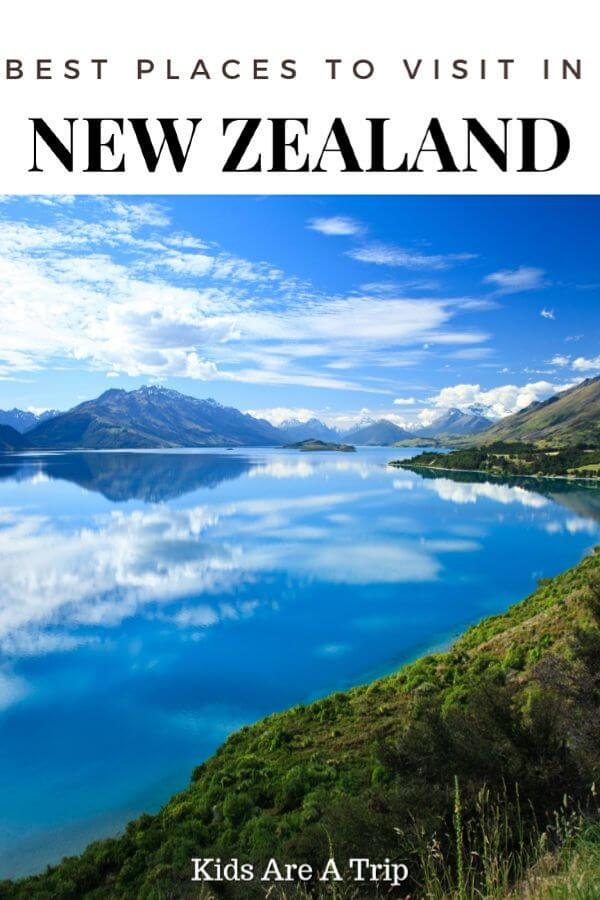 Best Things to Do in New Zealand with kids

Disclosure: This post may contain affiliate links, which means we may receive a commission if you click a link and purchase something that we have recommended. Please check out our disclosure policy for more details. Thank you for your support!

My most vivid childhood vacation memories are of family trips to New Zealand: touching a glacier, eating a meat pie, whale watching, soaking in mud pools. Everything I saw and experienced as a kid in New Zealand was so different from my everyday life. Magical. I wanted my own children to have a similar experience of wonder. So, this past summer, I booked a trip to visit New Zealand’s North and South Islands for our family of seven.

Our New Zealand trip was very quick. We only had five days to see the country. This meant, sadly, we didn’t have enough time to take a 25-hour drive, with ferry, from Auckland on the North Island to Milford Sound on the South Island. We opted instead to fly.

After two days on the North Island, we flew Air New Zealand from Auckland to Queenstown, for two days on the South Island. I would definitely recommend planning a longer trip than ours, but we did manage to cram an awful lot of fun into those few days! Hopefully this helps with planning your own New Zealand itinerary.

Auckland is the largest city in New Zealand, with an urban population of more than 1.5 million. Driving our rental car from the airport to downtown — on the left, in the dark, in the rain — was harrowing. So, while I’m sure there is plenty to do in Auckland, I was quite happy to leave the city bright and early the next day, in search of greener pastures and less traffic. We had a nice breakfast (which included the interesting New Zealand staple of spaghetti) and headed off, looking for sheep, rolling hills, and Hobbit holes.

If I had been visiting New Zealand on my own, I might have skipped the Hobbiton Movie Set tour. Because good grief, it is expensive. But my husband is a Tolkien fan, so we headed the two and a half hours south of Auckland to visit the pastures of the Shire. I’m glad we did. The sun was shining and it was easy to see why Lord of the Rings and The Hobbit director Sir Peter Jackson chose this sheep farm for his 12-acre movie set. The exceptionally lush Waikato region of the North Island is truly a slice of heaven.

Hobbiton Movie Set tours start at The Shire’s Rest, a café and gift shop. Approximately every 10 minutes, a new tour bus leaves to transport guests to Middle-earth. I was thankful I had purchased our tickets online, because even in winter, every coach was full. We chose the Tour + Meal option, so our tour started with a delicious lunch banquet. Then, we followed our guide on trails leading to a series of Hobbit holes, and learned quite a lot about the filming of the movies. After walking through woods, past the Mill and over a bridge, our tour ended in The Green Dragon Inn for a nice, warm drink by the fire. It was a delightful afternoon, and included some of the best scenery of our trip.

Continuing south, we headed to Rotorua, a town known for its geothermal activity (with accompanying sulfur smell) and Maori culture. We checked into our hotel and rushed out front to be picked up for another tour. This one, a dinner tour of Tamaki Maori Village, is TripAdvisor’s highest rated tourist attraction in New Zealand.

The guests with whom we shared a bus to Tamaki Maori Village became our tribe for the evening. One lucky gentleman was named our chief. When we arrived at the village, we stayed with our tribe and watched our designated chief participate in a welcome ceremony. Entering the village, we stepped back in time and learned about Maori language, tattoos, traditions, dance, games, history, and song. As we moved through stations as a tribe, we interacted with different residents of the village. My teenage son was picked to try a Maori game. At another station, my husband was taught how to pound his chest, stick out his tongue, and yell like a Maori man. Following these demonstrations, we were treated to a traditional song and dance performance and a delicious meal. It was a delightful evening and the kids loved every minute.

The next day, we headed out to see geysers and colorful crater lakes. There are several places nearby that boast geothermal activity viewing, for a fee. We chose Wai-O-Tapu Thermal Wonderland, twenty minutes south of Rotorua. Here, for the price of admission, we were granted access to self-guided hikes though some of the area’s natural attractions. Unique features at the park include colorful springs, steaming ground, volcanic craters, neon water, and the Lady Knox Geyser which erupts daily at 10:15 a.m. We spent a long time taking selfies in front of oddly colored pools and being awed by bubbling mud. It was a nice change of pace, wandering around on our own without needing to stick with a group.

But, we had to keep moving – my teenage son insisted on finding a kiwi. Given they are nocturnal birds, it seemed unlikely we would find one on our own. I thought it best to head to Rainbow Springs, the world’s largest kiwi hatching facility. This small Rotorua wildlife park is a delightful mix of animals and play areas, but it is almost entirely outside. It was raining when we visited, so we didn’t get to enjoy it as much as I would have liked. Instead, we rushed through the outdoor fish and bird exhibits. The guided kiwi tour was indoors, thankfully, and we were able to view a few kiwi inside the nocturnal house. Mission accomplished.

The next day we flew to Queenstown and found snow! Much colder on the South Island, we bundled up and explored this ski town. Known as the adventure capital of the world, Queenstown was hopping with tourists looking to try bungee jumping, luging, jet boating, skiing, snowboarding, and winter sports galore. We couldn’t wait to get in on the action.

First things first, we needed to get up into the mountains. I bought tickets for Skyline Queenstown and we hopped aboard a gondola for panoramic views of Coronet Peak, The Remarkables mountain range, Lake Wakatipu, and Cecil and Walter Peaks. Once at the top, we all tried the Skyline Luge, a slightly terrifying thrill ride that zips you downhill on low luges, around tight bends and through tunnels. It proved too scary for my five-year-old — even when riding tandem with me — but my older kids went again and again.

Playing with a Yooner

After a taste of mountain fun, we wanted more! We headed to the Coronet Peak Ski Area to play in the snow. Here, you can rent a sledge (plastic sled) or something called a Yooner. We rented a few of each but the Yooners were the real hit. These fun contraptions let you sit on a single ski. They require a bit of balance, but go really fast. So, we stayed and Yoonered on ski slopes until we were all soaked through and freezing.

Skiing at The Remarkables

We had originally planned to spend a day skiing at The Remarkables, but changed plans after realizing how cold it was without proper ski gear. We did head up to the lodge to see the resort, and while the views are incredible, the drive up the mountain is very, very scary. If you’d like to ski here, I’d recommend parking at Coronet Peak and catching the shuttle bus over to The Remarkables.

Instead of skiing, we spent a low-key morning exploring Queenstown on foot, ate at the iconic Fergburger, and walked through the free Queenstown Gardens. Then, we struck out of town to take a hike on Bob’s Cove Track. This was amazing. Walking alongside Lake Wakatipu, the scenery was stunning. Hiking was easy for the kids and we took lots of breaks to let them skip stones, climb trees, and build forts out of fallen tree branches. We then drove a little way to Wilson Bay, which offered more breathtaking views. We had a wonderful, relaxing time and encountered very few other people.

Jet boat ride through a canyon

For one last adventure in Queenstown, I splurged on a jet boat ride. Shotover Jet was a huge hit with everyone except the 5-year-old (who was freezing) and my husband (who didn’t love the constant spinning of the boat). Everyone else said it was their favorite part of our New Zealand trip. On this boat, you get wet. Very, very wet. It flies through a canyon at high speed, doing 360 turns, and very narrowly misses walls at every turn. It is so much fun, but in winter it is extremely cold. I remember loving jet boating as a kid, in spite of the chill, so I was happy to share this experience with my thrill-seeking children.

My only regret is that we didn’t make it to Milford Sound. On the map, the fjord looks deceptively close to Queenstown, but the drive is eight hours roundtrip, which makes for a long day, and the sun sets early in winter. There are tours from Queenstown, but I wasn’t sure my kids would love a twelve and a half-hour bus excursion. I was conflicted, but ultimately decided to save it for another visit when we have more time. It’s always good to have a reason to go back. And my family is unanimous – we all hope to return to New Zealand one day!

We are a participant in the Amazon Services LLC Associates Program, an affiliate advertising program designed to provide a means for us to earn fees by linking to Amazon.com and affiliated sites. © Kids Are A Trip 2020. All Rights Reserved. Design by Alpine Lane
21shares