My husband has wanted to take our boys on ancestry travel in Scotland since they were little. When I was looking for a Scottish ancestry tour company, I came across Solway Tours. Their name came up time and time again as the best tour for genealogy travel in Scotland. We were hoping to create a tour of Maxwell sights in Scotland, to show our kids their family background. Solway Tours offers day tours from Edinburgh which saved us the expense of renting a car and driving on the left side of the road. 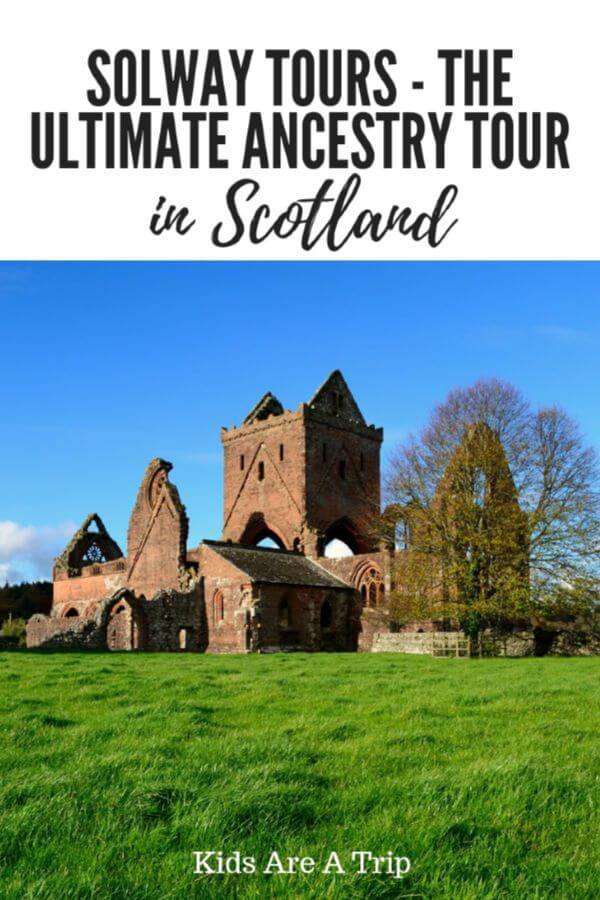 A Perfect Trip to Find Our Roots in Scotland

Once I connected with Solway Tours, they were very helpful in curating a family friendly tour in Scotland that not only focused on the Maxwell sights, but also gave the kids plenty of time to explore the outdoors. We thought searching for our Scottish heritage would be one of the highlights of our visit for Ancestry Travel in Scotland, and we were right.

A Day with Solway Tours – Travel to Dumfries and Galloway 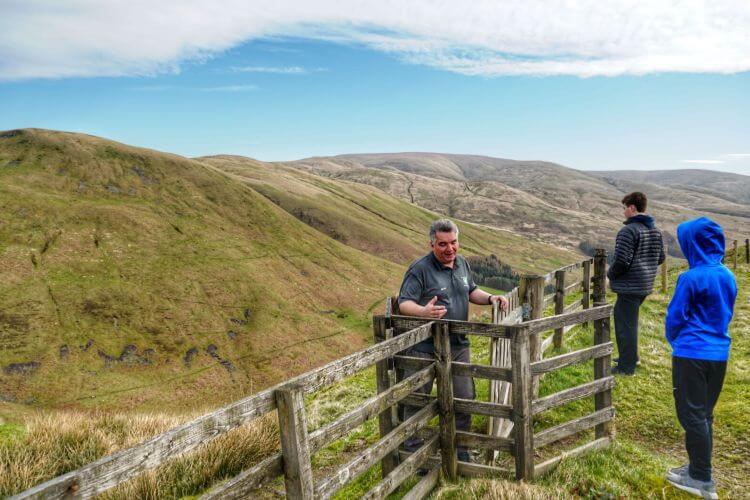 Located five miles north of Moffatt, Devil’s Beef Tub was where the Border Reivers (the Johnstone clan, known as the “devils”) would hide their stolen cattle hundreds of years ago. At the time, the main rival clans in this area were the Johnstones and the Maxwells. The Devil’s Beef Tub is a deep valley bordered by four hills and at the bottom is a stone circle. This would have been used to hold the cattle (or sheep). It is a breathtaking spot, and the perfect starting point for our heritage tour. 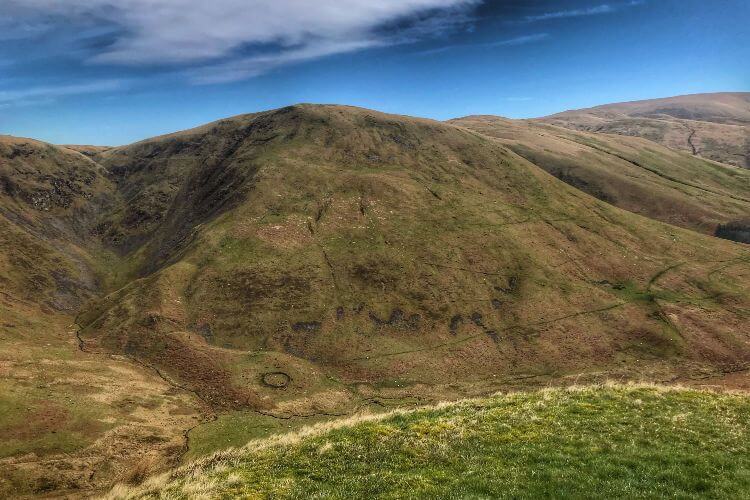 See the stone circle? That’s where they kept the stolen livestock.

Just outside the town of Moffatt is the most gorgeous waterfall, Grey Mare’s Tail. The sixty meter waterfall looks like a horse’s tail as it flows out of Loch Skeen down the cliff face to the river below. Our kids insisted on taking the steep hike to the top of the waterfall, but my knee gave out about half way up. My son took pictures from the top of the hiking trail and it is stunning. After the climb, the boys skipped stones in the river and probably would have stayed all day if allowed. 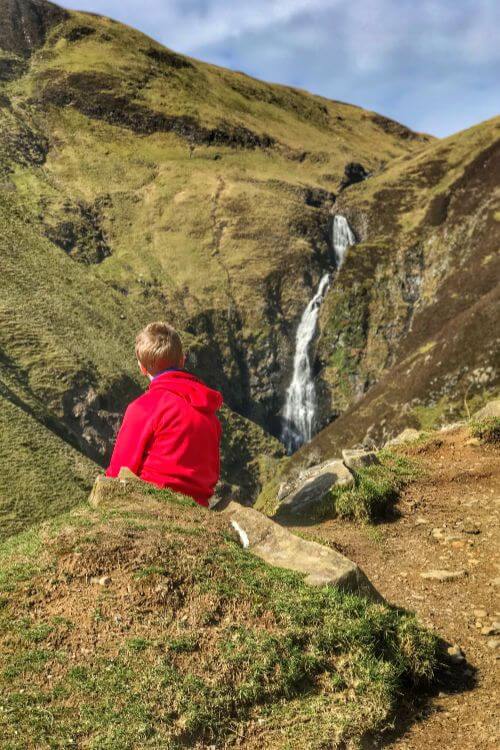 Just taking it all in.

Sweetheart Abbey is a Cisterian abbey that was founded in 1273 by Lady Dervorgilla of Galloway, who insisted on dedicating the building (Dulce Cor – Sweet heart) to her deceased husband, John Balliol. As if that wasn’t enough, the widow had her husband’s heart embalmed and placed in an ivory box which she carried around until her death in 1289.

Over the years, local gentry was responsible for protecting the monks within the Abbey. The Catholic Maxwells were not only abbey patrons, but protectors as well. They continued to worship and guard the Abbey until the monks were forced to leave in 1608.

Today Sweetheart Abbey lies in ruin, but there are ongoing efforts to restore it. The original red sandstone bricks have been removed by locals over the years and placed in some of their homes. However, the current restoration has had a few problems and the site is closed to visitors (although you can still see its glory from outside the gates). 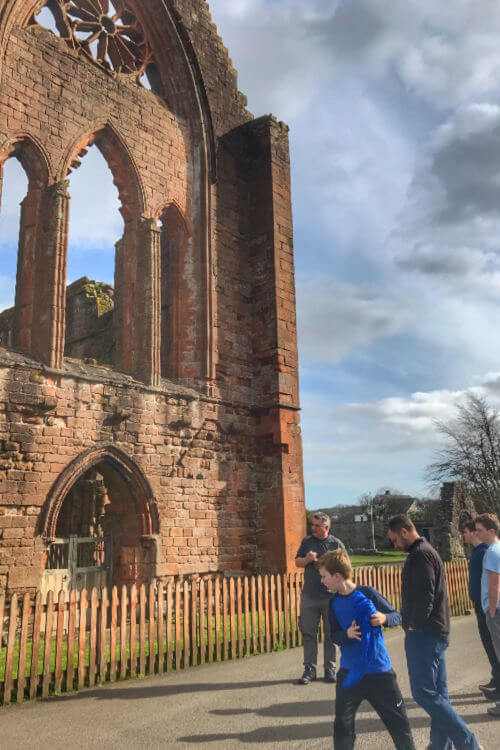 Caerlaverock was the final stop of our tour, and everyone was very excited to see it. About seven miles south of Dumfries, lies Caerlaverock Castle, home to the Maxwell clan for centuries. The triangular red sandstone beauty is not the original castle which lies some 600 feet beyond the existing one. For reasons unknown, the original castle was abandoned about 50 years after it was built and a new one was constructed. 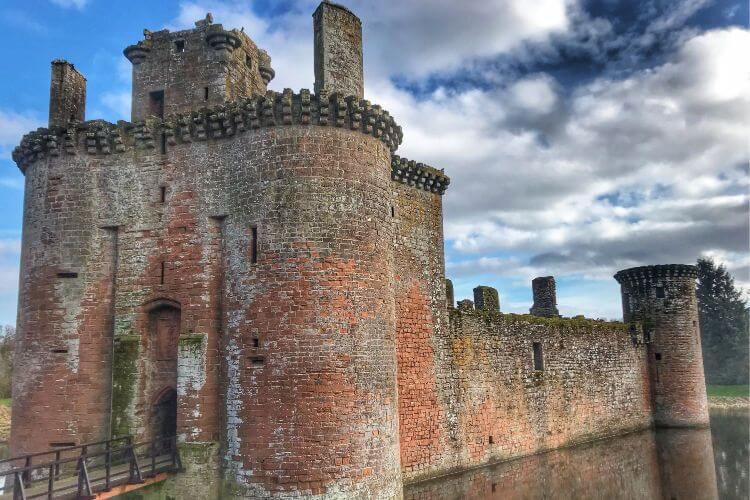 Scottish King Alexander II granted the land in 1220 to Sir John Maccuswell (Maxwell), the Chamberlain of Scotland, to help protect the border between Scotland and England. After the first castle was abandoned, Sir John’s brother began construction of Caerlaverock Castle, around 1260, and it was completed sometime in the 1270s. The castle was attacked by the English many times in four centuries, until the final attack in 1640 when the Catholic Maxwells lost a battle to the Covenanters (Scottish Presbyterians) and the Maxwell castle was destroyed to prevent occupation.

Caerlaverock Castle is unique in that it is a triangular shaped castle. There are only a couple of others in the world: Wewelsburg Castle in Germany and Fortezza di Sarzanello in Italy. Caerlaverock is surrounded by a wide moat and each corner of the triangle has a look out tower. We enjoyed an hour of exploring the nooks and crannies of the castle and the surrounding area before heading back to Edinburgh. (Interested in castles? Check out our best castles in Europe post HERE). 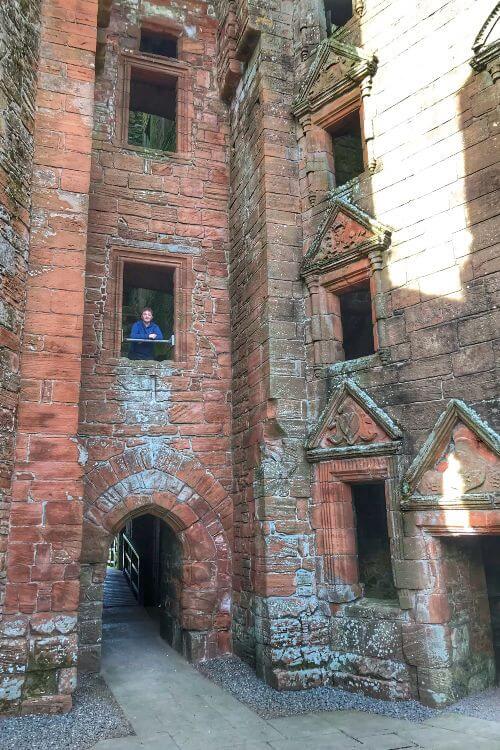 The Best Experience for Finding Our Family Roots

We had a wonderful time exploring Dumfries and Galloway with Mark and Lesley. They are genealogy specialists who know a lot about Scottish heritage and Scotland itself. Our children will say this is one of the best Edinburgh day trips we took on our vacation to Scotland and we would have to agree. 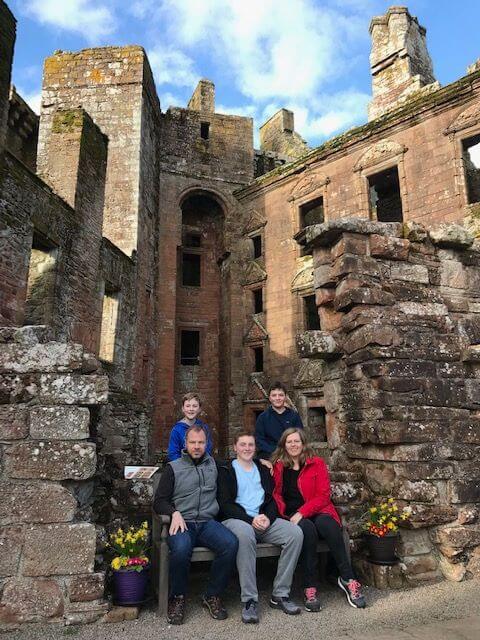 About Solway Tours: Mark and Lesley are retired school administrators from the Dumfries area. Mark has a background in political science and Lesley knows everything there is to know about history (seriously). They left their professions, thinking this was going to be a two year experiment, but found plenty of success, and are now five years in as tour guides. Solway Tours offers custom tours for heritage travel as well as historic Scotland tours. They are even expanding their offerings to World War I battlefields in France and Belgium. You can also find them on Facebook and Instagram.