Lisbon has received a lot of attention in the press lately, having been named at the top of many “must see” destination lists. With year round moderate temperatures, a thriving arts scene, and welcoming locals, it’s easy to see why the city enchants visitors. Three days are not enough time to do the city justice, but sometimes it will have to do. Here’s how to have the perfect weekend in Lisbon with kids.

*We were provided with Lisboa Cards to use on our visit to Lisbon and were guests of the Martinhal Chiado property. As always opinions in this article are 100% my own.

How to Spend 3 Days in Lisbon with kids

Lisbon is commonly referred to as the “City of Seven Hills”, which means there are high and low points throughout the city. In some of the older districts, expect to find cobblestones and uneven pavement.

If this might be a problem, the best bet is to use city transportation. There are buses, trams, subways, and elevators to get from point A to point B.

The city is divided into districts. The main tourist ones are: Baixa, Chiado, Bairro Alto, Alfama, and Belém. It’s best to focus on a particular district and its attractions for part of the day instead of moving all over the city.

Belém is known as the launching point for Vasco de Gama’s famous expeditions, but it is equally renowned for the pasteis de nata (custard tarts) of Pastéis de Belém, one of the traditional Portuguese foods. The original shop opened in 1837 next to the Jerónimos Monastery to raise funds for clergy and workers since the convents and monasteries were shut down during the 1820 revolution.

The recipe of the pastéis de Belém is a well guarded secret, which is part of what draws a crowd all hours of the day. After grabbing a savory treat, head out to explore the area.

There are three not to miss spots in Belém: Jerónimos Monastery, Belém Tower, and the Monument to the Discoveries.

Jerónimos Monastery was built in 1502 and is a testament to Portugal’s wealth during the Age of Exploration. It is an UNESCO World Heritage site and the elaborate, decorative Manueline architecture is stunning.

Kings of Portugal, Vasco de Gama, and the famous poet Luis de Camões are buried here. It’s wonderful to explore all of its nooks and crannies and marvel at the intricately carved archways and columns.

Belém Tower is just down the road from Jerónimos Monastery. The tower sits majestically on the shore of the Tagus River and offers beautiful views along the waterfront. Inside the tower visitors can tour different levels from the upper terrace to the lower dungeon. This UNESCO site was built in 1515 and was the first (and last) sight sailors would see in the harbor.

Monument to the Discoveries was erected in 1960 to celebrate the 500th anniversary of the death of Henry the Navigator. It is a giant ship with sculptures of famous people in nautical history from Magellan to Henry the Navigator. Inside there are rotating exhibitions and it is possible to take an elevator to the top for a view of the surrounding Belém neighborhood, the 25 de Abril bridge, and Christ the Redeemer statue on the other side of the river.

Of course there are other sites to see in Belém, but for those short on time, these three are a must. Other popular attractions in the area include the National Museum of Coaches, the Cultural Center of Belėm, and the Maritime Museum.

The Alfama is the oldest district in Lisbon and home to one of the city’s most recognizable monuments, Sao Jorge Castle. The fortification was built by the Moors in the 11th century, but conquered by Dom Alfonso Henriques (the first king of Portugal) in 1147. To reach the castle, visitors must navigate the Alfama’s famous medieval maze of streets, but the view is worth it.

The castle is the main attraction in this area, but there are other sights to explore. Some might recommend using Tram 28 to get around, but we found it’s easier to explore on foot and the tram is notorious for pick pockets. The Se Cathedral, National Pantheon, Fado Museum, and Roman Theatre Museum are all located in the Alfama district.

Baixa is the main shopping district of Lisbon and where many tourists tend to congregate at some point during the day. The main pedestrian corridor is Rua Augusta running from Commerce Square on the waterfront to Rossio Square, the heart of the city. This is the place to do some shopping, grab a bite to eat, or watch the street performers.

One thing not to miss is the Santa Justa Elevator. Designed by Raoul Mesnier du Ponsard, a student of Gustave Eiffel, this 1902 wrought iron lift transports passengers between the Baixa and the ruins of Igreja do Carmo (Carmo Church). The ride to the top offers spectacular city views and is easier than climbing up the hill. 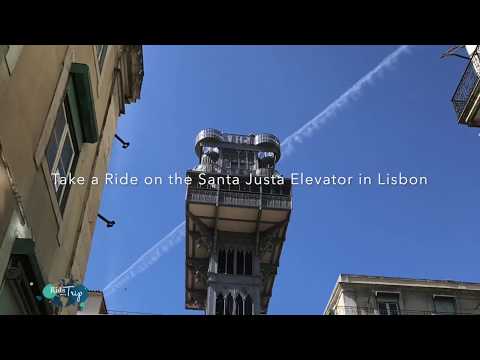 The Carmo Church warrants a visit as well. This Gothic church was completed in 1423 and was the largest church in Lisbon. On November 1, 1755 a series of earthquakes and a tsunami struck the city causing massive damage and killing over 60,000 people.

The Carmo Church was left standing in ruins. Today it is a haunting reminder of what was lost and how the city has rebuilt around it. It’s beautiful to walk around and explore the different exhibits that tell the story of this church, the neighborhood, and its history.

Not far from the Carmo Church is the Barrio Alto district. Peaceful during the day, this area is quite loud in the evening with many bars and restaurants in the area. Head over to the Miradouro de Sao Pedro de Alcantara, a peaceful park in the middle of it all. This garden has spectacular views of the city and is located next to the Gloria Funicular.

The Gloria Funicular has been transporting passengers from Restauradores Square to Bairro Alto since 1885. It’s fun to take a quick ride up and/or down the hill.

Chiado is the upscale, trendy area of Lisbon, filled with cafés, fashion houses, and high end retailers. On a weekend visit, take a stroll through the neighborhood. Stop for a coffee at the famous Café Brasiliera, one of the oldest cafés in Lisbon. It’s easy to recognize with its bright yellow patio umbrellas and constant stream of tourists.

Where to eat in Lisbon with kids

Not far from Chiado near the river, don’t miss Time Out Mercado da Ribiera. This former market place was revitalized in 2014 by Time Out Lisboa. Inside is a feast for the sense with food stalls featuring dishes from some of Lisbon’s finest restaurants.

It’s the updated version of a food court and we loved it! Everything from hamburgers to seafood to ice cream co-exists under one roof. Outside the food hall it is a typical market selling the daily fish deliveries, gorgeous flowers, and fresh fruit. Worth a visit at least once in a weekend!

If you or your kids are vegan, don’t worry, there’s plenty in Lisbon for you to eat. Use this Lisbon vegan guide to find the best vegan tours and restaurants in Lisbon.

It looks like a lot, but we managed to see most of the highlights listed above in a weekend. Here are some other tips that helped us get around.

As mentioned above, use funiculars, elevators, the metro, and buses as needed. The hills in Lisbon can be exhausting. As an alternative, there are tuk tuks available for hire. These are available near Rua Augusta and Rua Comércio. Definitely a different way to explore Lisbon with kids!

Invest in a Lisboa Card

The Lisboa Card is similar to those found in other major cities, in that it offers free entrance (and discounts) to major attractions, free transportation throughout the city, and skip the line privileges. The card is available in 24, 48, or 72 hour increments.

It even offers free day trip transportation for those wishing to visit Sintra or Cascais. This is a great way to save money in Lisbon with kids as it provides discounts on quite a few attractions, the elevator, and funicular.

Lisbon is a city that can be physically grueling, especially when walking instead of taking public transportation. Take plenty of breaks! There are cafés everywhere, shops with water and snacks, and fresh fruit stalls in many of the town squares. Stop as needed and refresh!

Where to stay in Lisbon with kids

We stayed at Martinhal Chiado and loved the central location. It provided access to everything. Baixa, Chiado, and Bairro Alto provide excellent home bases for exploring the city.

The weekend in Lisbon went by in the blink of the eye. In hindsight, the city deserves in depth exploration and relaxation. Lisbon was one of our favorite European cities to visit and we are already trying to find a time to return.

Looking for other places to add to your Portugal itinerary? Don’t miss Porto with kids, how to plan a trip to the Douro Valley, best reasons to visit Alentejo, or our review of the Martinhal property in Cascais.