This week we are thrilled to introduce our newest teen contributors, Corey and Skylor, who love to travel and write about their experiences, just like the other writers on our team. Their first article is about one of their favorite places to visit, Seoul, South Korea. I love reading about this new destination, and finding out what are some of the fun things to do in Seoul with teens. 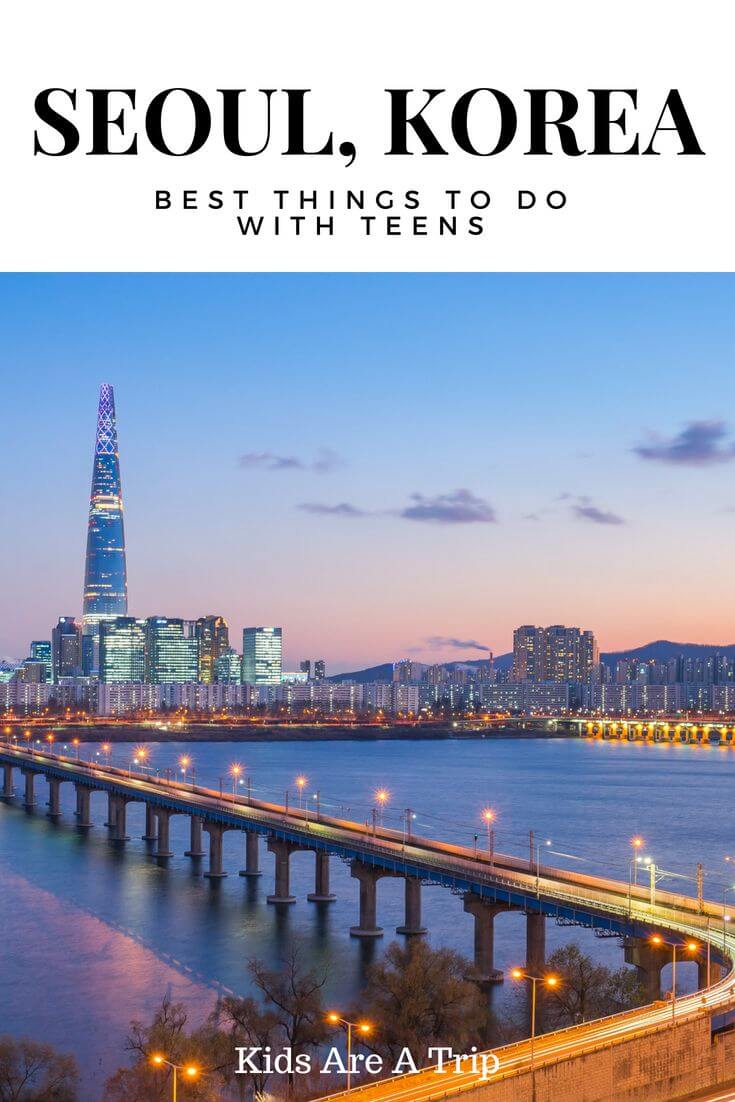 Best Things to Do with Teens in Seoul

Check out the cool art work at the Trick Eye Museum

Get in touch with nature at Jeju Island

Another fantastic stop to make on a trip to South Korea is a large island south of Korea called Jeju Island. There are many beautiful beachfront properties on the island, and the beaches are stunning. By far, my favorite part of Jeju Island is climbing up the towering Mt. Hallasan. At 6,398 ft., it is the tallest mountain in South Korea. There are beautiful ocean views that can’t be compared and it is a blast hiking up to the summit. Although the hike up the mountain can be a bit tiring, it is completely worth it for the view. I saw the expanding blue ocean in one direction and beautiful green hills in the other. I would highly recommend hiking up Mt. Hallasan if you are looking for an amazing view of Jeju Island.

Learning about Korean history in a DMZ tunnel

One of my favorite attractions in Korea is the DMZ tunnel at the border of South Korea (Third Tunnel of Aggression). The long hike down the tunnel is filled with Korean history and many cool sites where you learn about the secrets of the Korean War.

My family and I hiked all the way to the bottom of the tunnel where there was barely enough room to squeeze through single file. Learn about how the South Koreans blocked the tunnel dug by the North Koreans to prevent the North Koreans from invading Seoul. If you are interested in Korean history this is a great place to visit in Korea.

Have an adventure at a Korean theme park

Lotte World is a magical place. Craziness and fun fill the air. Being in Lotte World is like being in a whole other world. Lotte World is both inside and outside so don’t worry if the weather is crummy. There are rides and attractions every which way.

The park has thrill rides, but they are not as intense as Universal or Six Flags. We tried two rides, French Revolution and Gyro Drop. There were many other rides that looked fun, but unfortunately we did had limited time and did not get to try them. French Revolution is an indoor roller coaster with a large loop. Gyro Drop is outdoors, and it drops you from 230 feet up. Although the lines can get long, having company will make the wait fly by. Lotte World is the perfect place to laugh and make memories with friends or family.

Take in Seoul’s beauty from above

The Namsan Seoul Tower is the second highest point in Seoul. Thankfully an elevator took us up the tower instead of climbing 236 meters of stairs. Souvenirs are sold everywhere throughout the viewing area at the top of the tower, but the 360 degree view of Seoul is breathtaking.

A downside of the Namsan Seoul Tower is the long wait because only a certain number of people are allowed in the viewing area at the top of the tower at a time. Another downside is the viewing area is inside and the glass can make pictures blurry. However, there are many other beautiful spots to take pictures around the tower. Although there are cable cars to go up to the base of the tower, the lines can be long and the only alternative is walking the stairs, which trust me, is tiring. The Namsan Seoul Tower is a great stop to take pictures and soak up the vibe of Seoul.

GET TRAVEL IDEAS, ADVICE & DEALS
IN YOUR INBOX EACH MONTH!

Just tell us where to send all these goodies!