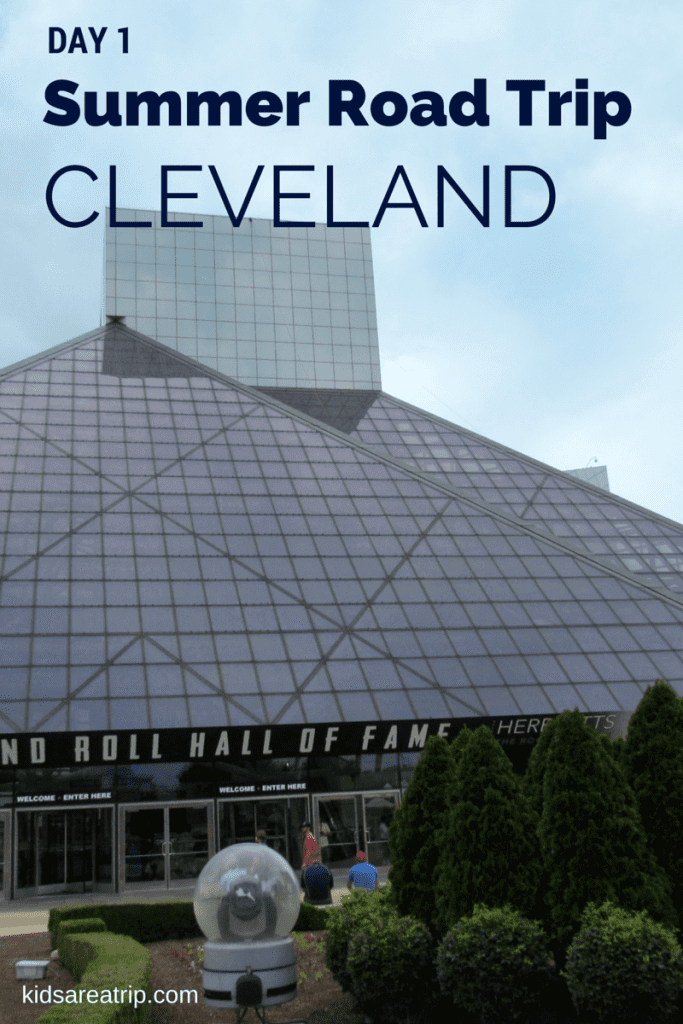 Every summer many families partake on a great American road trip, and this year our journey has brought us to Cooperstown, New York. Our oldest son and his team has the opportunity to play baseball at the Cooperstown Dreams Park complex for the week. He will stay in the barracks on property, while we stay elsewhere, but we get to see him everyday while his team plays baseball. Teams come from all over the United States (and from Canada too), to play America’s past time and share moments as only 12 year old boys can. Our family thought it would be fun to bring not only our children but my parents as well on our great American road trip (even though they flew in from Arizona), and the experience so far has been rewarding in many ways.

This week I will be recapping what we have seen so far until I get caught up in real time. Unfortunately, the wi fi in this part of New York is not as I anticipated, so I am doing my best. Here we go.

Day 1: Drive to Cleveland (a.k.a. We needed coffee)

We woke up around 4 a.m. to get an early start on the day and avoid any late morning traffic that would coincide with the Chicago Blackhawks victory parade (yay Hawks)! We loaded the Chevy Tahoe and was thrilled to see that everything could fit for our family of five. 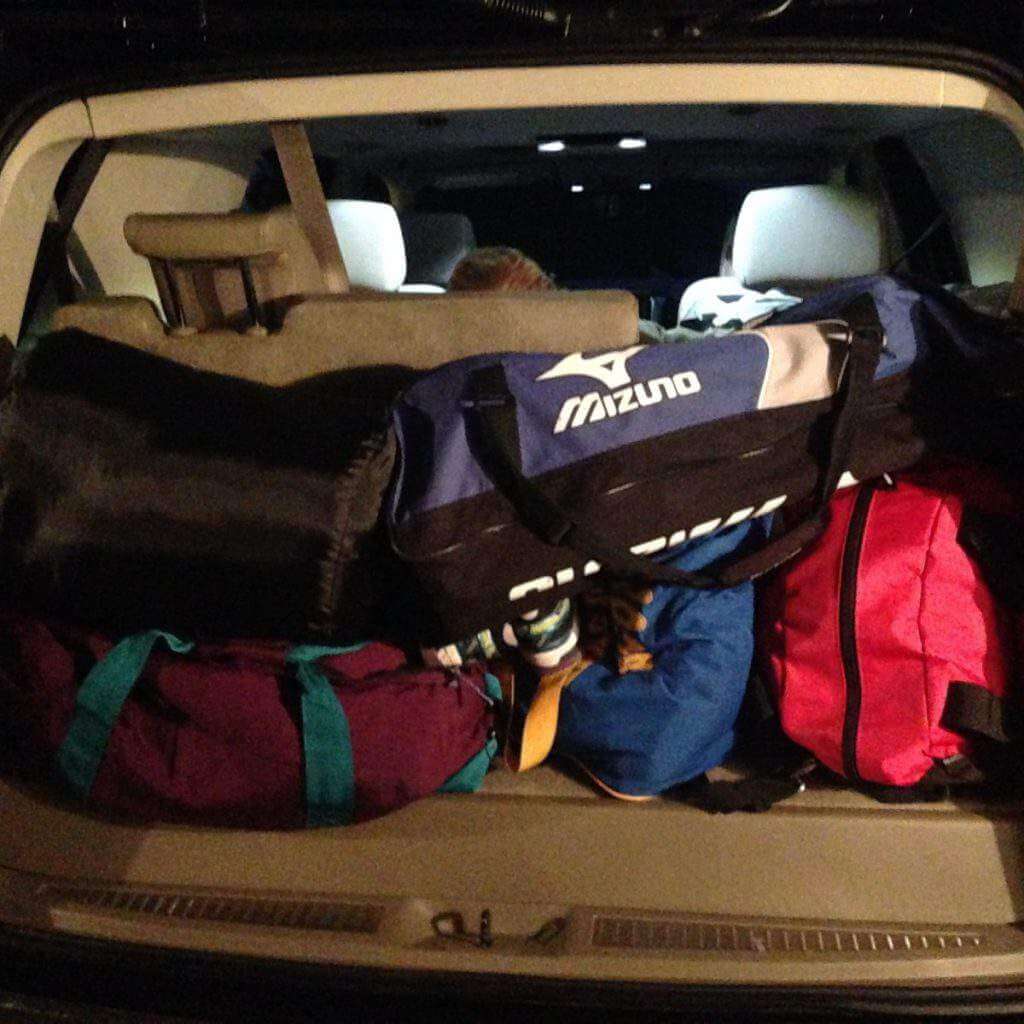 The trunk holds everything!

About an hour and a half into the trip, as I’m trying to locate the nearest Starbucks, I notice on my map that we are somewhere in Michigan. Um, what? We are supposed to be in Indiana! Yep, we added an hour and a half onto our trip because someone (we won’t say who) took a wrong turn out of the city. We definitely should have found coffee sooner! 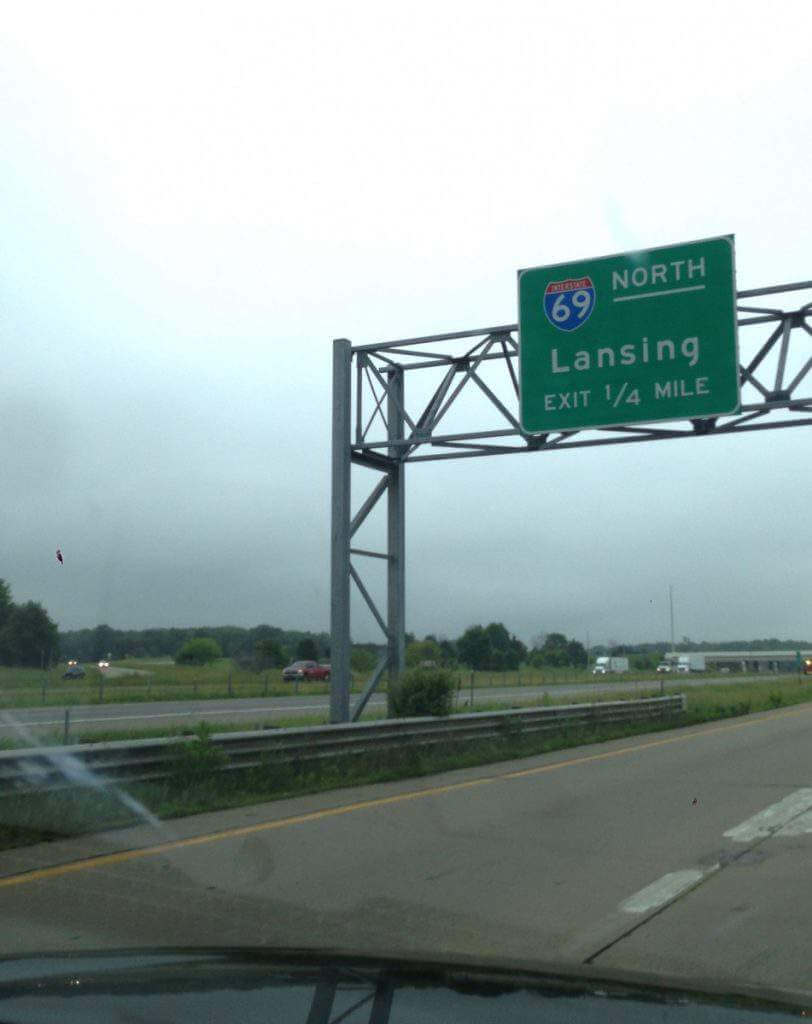 The trip did take a little longer, but the kids didn’t mind because the car has this amazing built in wi fi system so everyone can be on their devices at once. At times it was great, but it did kind of take away from the old fashioned road trip experience. I couldn’t get any takers for the license plate game.

We arrived in Cleveland around 1 p.m. and hit the ground running. We started at the Greater Cleveland Aquarium just across the bridge from the main downtown area. The aquarium is housed in the former First Energy Powerhouse which gives the building a very unique feel. The kids enjoyed seeing the variety of fish, petting the stingrays, watching the turtles, and walking through the shark tube. The museum is well laid out and exhibits are very informative covering geographic areas from around the world. The visit took us about 45 minutes, but you definitely could stay longer. 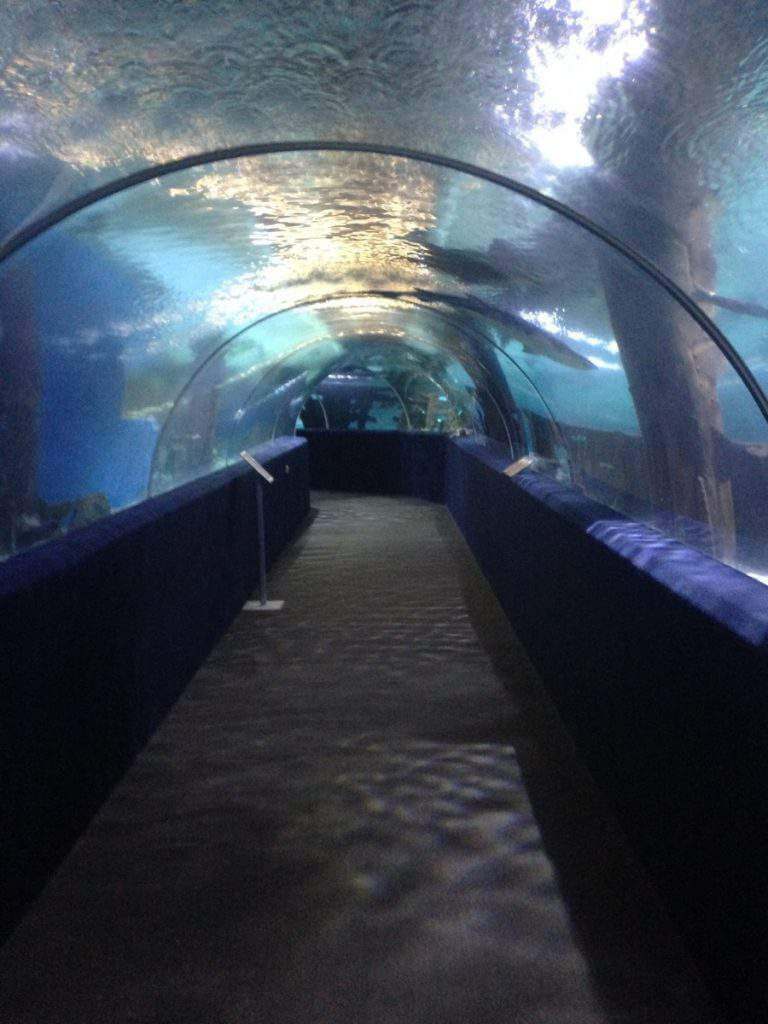 After a tasty lunch, we walked to the Great Lakes Science Center where the kids would have stayed for hours if we would have let them. The kids loved the NASA Glenn Visitor Center with its variety of space artifacts including an Apollo command module, a moon rock, and space suits. Their favorite part was the upper floor with its “Science Phenomena” center. This area includes over 100 hands on science experiments. We didn’t try all of them, but we certainly came pretty close. We were there for close to an hour and a half and had to bribe the kids to leave so we could make it to The Rock and Roll Hall of Fame before it closed. 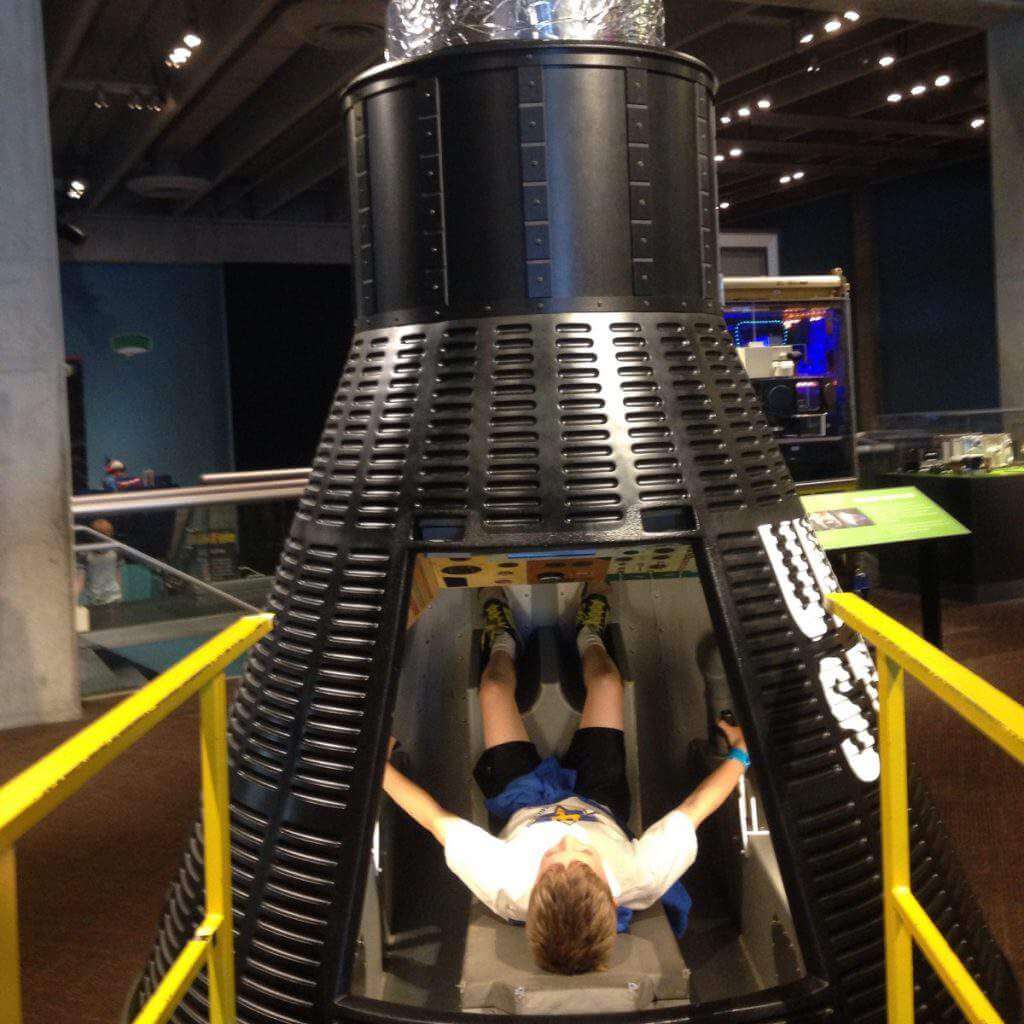 Someone wants to be an astronaut!

Thankfully The Rock and Roll Hall of Fame and Museum is right next door to the science center. The place was very busy and when they told me the museum covered six floors I was concerned we were not going to have enough time to see everything. We definitely saw everything, but at this point the kids were getting tired and cranky, basically rushing us through everything. I would love to go back again and have a chance to read about all of the amazing items they have in their collection and learn more about the inductees. The place is fascinating, well laid out, and a true tribute to the history of American music. 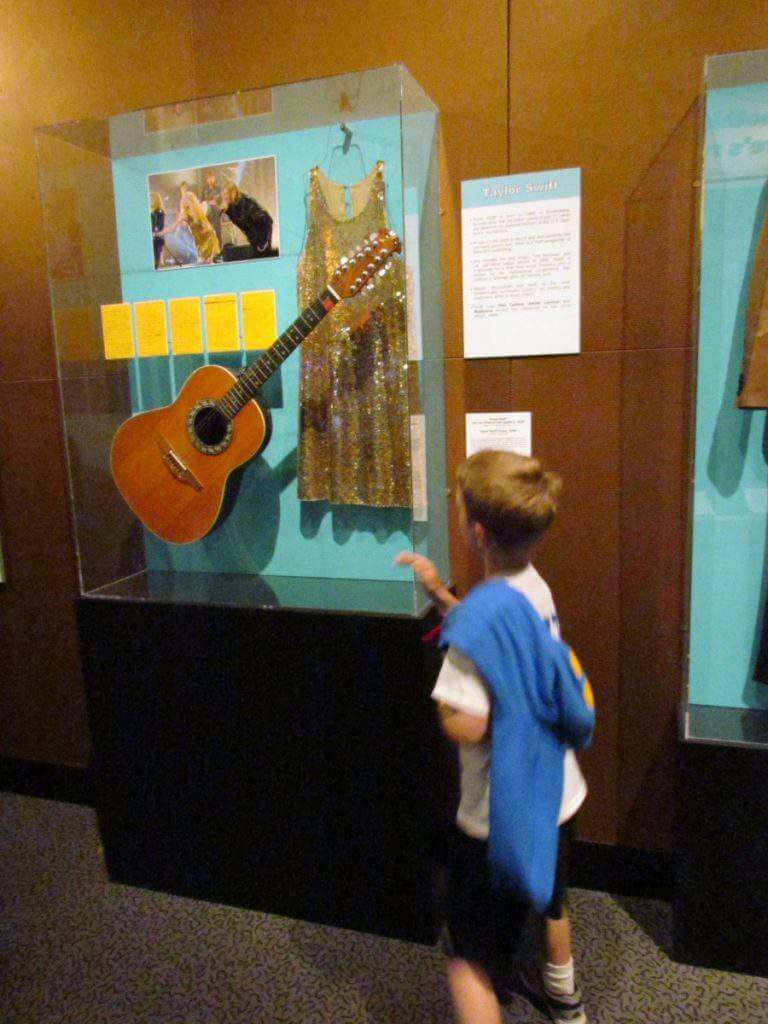 Some he knows – Taylor Swift!

We walked from the museum to our hotel, the Holiday Inn Express Downtown. The hotel is in the perfect location for Cleveland, centrally located to restaurants, shopping, and attractions. The hotel itself is a 19th century former bank building and the lobby is stunning. The rooms have 13 foot high ceilings and are very spacious. We had a kitchenette and the living and bedroom area were separate. There was an evening reception and a generous buffet breakfast was included. We would definitely stay here again. For a more detailed review, you can check out our post on TravelingMom.com. 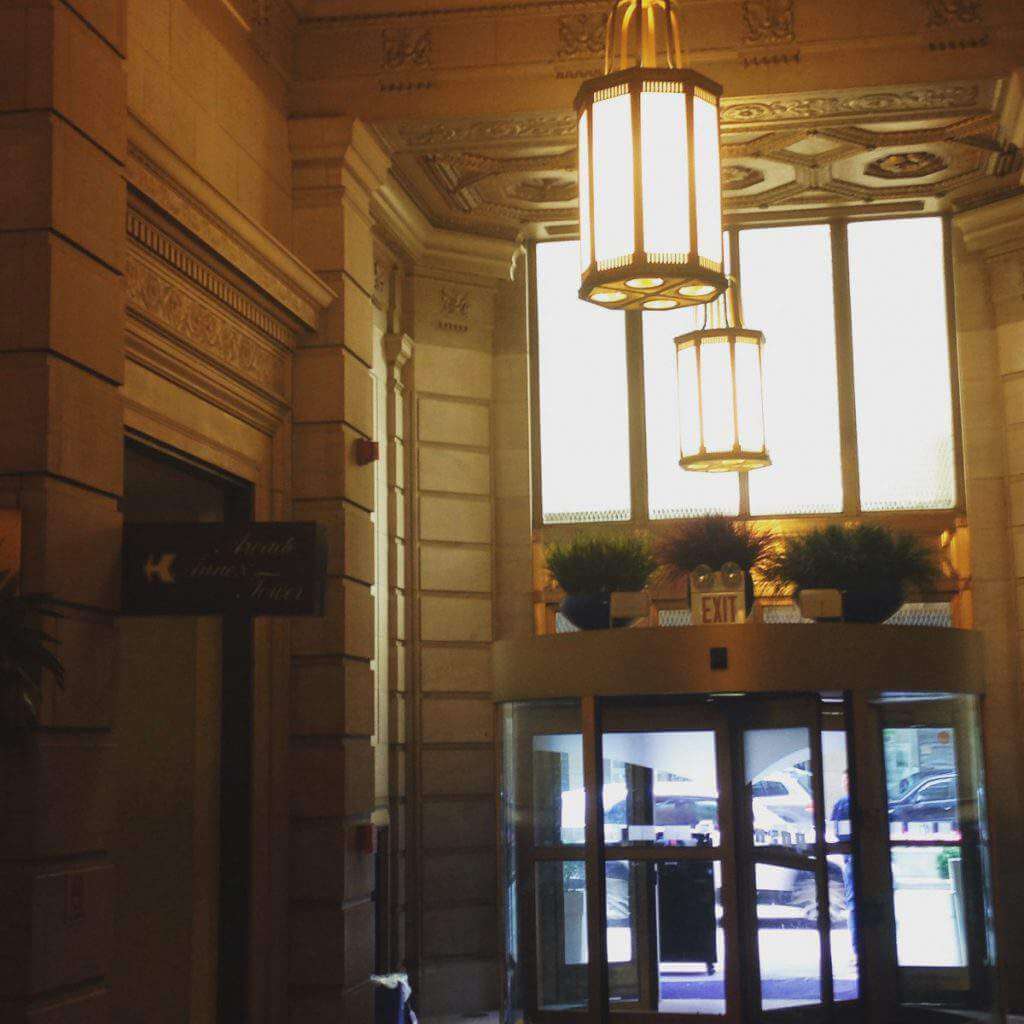 Beautiful lobby of the 19th-century building where the HI Express is located.

My husband and oldest son were able to see the Chicago Cubs play the Cleveland Indians that night at Progressive Field while we enjoyed a delicious meal directly across from the hotel at Hodge’s. The rest of us were eager to call it an early night as we were exhausted and we had another long day ahead of us tomorrow.

The stadium looks amazing, but I needed some sleep!

From the short time we spent in the city, I was very impressed with all that Cleveland has to offer. It is has a strong foodie culture, beautiful architecture, and an interesting history. We look forward to returning in the future and exploring the rest of the city.