Our family loves a good road trip and we love the Alabama Road Trips suggested by their state tourism department. They have covered the state, designing itineraries with the whole family in mind. Maybe your family would enjoy the miles of pristine Gulf Coast beaches, exploring Alabama’s National Parks, or maybe they are more inclined to explore the city life of Birmingham and savor some mouth-watering barbecue. Whatever type of adventure your family is seeking, Alabama is sure to please with its fantastic food, beautiful beaches, and Southern hospitality.

1. Mobile Bay on the Gulf Coast

Enjoy the beautiful beaches of Alabama and the history of Mobile Bay.
Photo courtesy of Alabama Tourism Department

Alabama has 32 miles of sandy seashore and many families think a beach is the perfect place for a vacation. The Gulf Coast sounds perfect with its sugar sand and gentle waves, but families with a thirst for knowledge should head to Mobile Bay, home to two 19th century forts that saw action during the Civil War, Fort Morgan and Fort Gaines. Nearby is the Battleship USS Alabama where kids can explore the ship, a submarine, and an airplane hangar. Hands on history at its best. 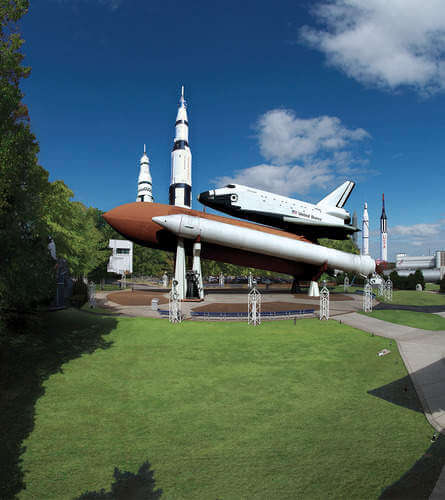 Huntsville is home to the U.S. Space and Rocket Center, the largest and most comprehensive space flight museum in the world. Inside the center visitors have a chance to view a multitude of space artifacts including Mercury and Gemini capsule trainers, the Apollo 16 capsule, and one of the few V-2 rockets in the nation. There are also a variety of space simulators to explore including a G Force accelerator that allows visitors to experience 3Gs pushing against their bodies and a rocket launch simulator called Space Shot. Children will love pretending to be astronauts for a day!

3. Caverns, meteorites, and playing with gravity in Childersburg and Sylacuaga

Families who love to explore should head to DeSoto Caverns Park in Childersburg, where they can visit a 12 story cave, then head outside to enjoy 25 attractions such as miniature golf and bumper cars. Before leaving they can sample the delicious DeSoto Caverns fudge which is featured as a “must taste” on Alabama Tourism’s app “100 Dishes To Eat in Alabama Before You Die.”

Further up the road outside Sylacuaga visitors will find the town of Oak Grove where a meteorite crashed into a home in 1954 and another landed on a nearby farm. They were the only two meteors known to have fallen from the sky that day. What’s even cooler is nearby Gravity Hill, where oddly enough, cars seem to defy gravity by rolling uphill. Something you definitely need to see to believe.

4. Sometimes it’s all about the Alabama Barbecue 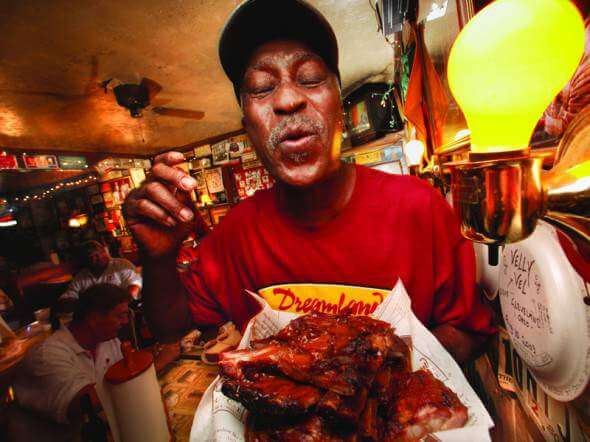 If your family loves to eat, Alabama is the place for you. Alabama has a reputation for some of the nation’s best barbecue, and was named the “Most BBQ Crazed State in the US” last year. Here are some of the top places to savor that “Sweet Home Alabama” BBQ flavor your family won’t want to miss:

Big Bob Gibson Bar-B-Q in Decatur: This restaurant has grown from Gibson’s backyard to a regional barbecue staple, garnering attention from media and cooking competitions around the country. Big Bob Gibson’s unique sauces are mayonnaise-based, and this, combined with meat smoked in hickory-fired brick pits, helped the restaurant take off and established white barbecue sauce as a North Alabama regional specialty. Four generations of the Gibson family have continued the restaurant’s tasty traditions.

Dreamland Bar-B-Que (multiple locations): First opened by John “Big Daddy” Bishop in 1958, the story goes that the idea to build a restaurant on the land next to his home came to Bishop in a dream. Soon Bishop and his wife were selling ribs, sandwiches, and more to regular customers. The sauce recipe is a tightly kept secret, but what is known is that the sauce is vinegar-based with hints of garlic and brown sugar. Dreamland encourages its customers to use the slices of white bread served with the ribs to soak up any extra sauce left on their plates.

Jim ‘N Nick’s Bar-B-Q in Birmingham: Jim ‘N Nick’s has served the Birmingham community for more than 25 years, and now boasts more than 25 locations throughout the South. Known for its pulled pork, cheese biscuits, and homemade slaw, the restaurant consistently receives accolades from local and national publications like Saveur and Bon Appétit. In addition, Jim ‘N Nick’s was crowned the winner in the Alabama Tourism Department’s inaugural Alabama BBQ Bracket.

It’s obvious to me, if your family loves barbecue, you won’t be disappointed by any of the savory barbecue Alabama has to offer.

5. Have an outdoor beach adventure in Gulf Shores and Orange Beach

Alabama’s beautiful Gulf Coast offers adventures at every turn of its 32 mile stretch. Maybe the kids want to sail with pirates, go deep sea fishing, take a hot air balloon ride, scuba dive, or go on a dolphin excursion. All of this is possible along the Gulf Shores. The problem will be knowing where to begin.

Be sure to use these useful Alabama travel sites to help you plan your trip:

This is a sponsored conversation written by me on behalf of Alabama Tourism. The opinions and text are all mine.