This week’s “See the World” we are visiting the amazing destination of Mexico City! Hopefully you had a chance to see London last week and  Kilkenny, Ireland the week before. If you missed any of  the other destinations this year, you can find them here! This week we have the incredible Katja from globetrotting sharing her top 5 family friendly things to do in Mexico City. Come explore!

The words ‘Mexico City’ and ‘family-friendly’ don’t often appear in the same sentence but the truth is that Mexico’s big, brash capital is a great place for kids. Yes, it’s enormous (one of the biggest cities in the world), with a population to match (some 20-odd million people) but having lived here for five years with my three children, I can honestly say that Mexico City has a lot going on for families. So much so, in fact, that it was hard to narrow it down to just five things to do. Here’s one tip before you begin exploring, however, don’t try and cram too much into a day; the traffic can be terrible so it’s best to stick to one neighbourhood at a time.

5 Family Friendly Things to Do in Mexico City

Start your Mexican adventure by getting a feel for the city, or at least part of it, on the Turibus. Yes, I know these hop-on-hop-off tourist buses get a bad rap but this really is the best way to orientate yourself in this enormous metropolis. The double-decker Turibus runs several routes around the city, as well as a handful of themed tours, but your best bet is to jump aboard the Circuito Centro (the central circuit). This route takes you into the centre of the city, through some of the capital’s most interesting neighbourhoods. There are 16 stops in total so you can choose where and when to get off. The one stop you should not miss, however, is El Centro Histórico. 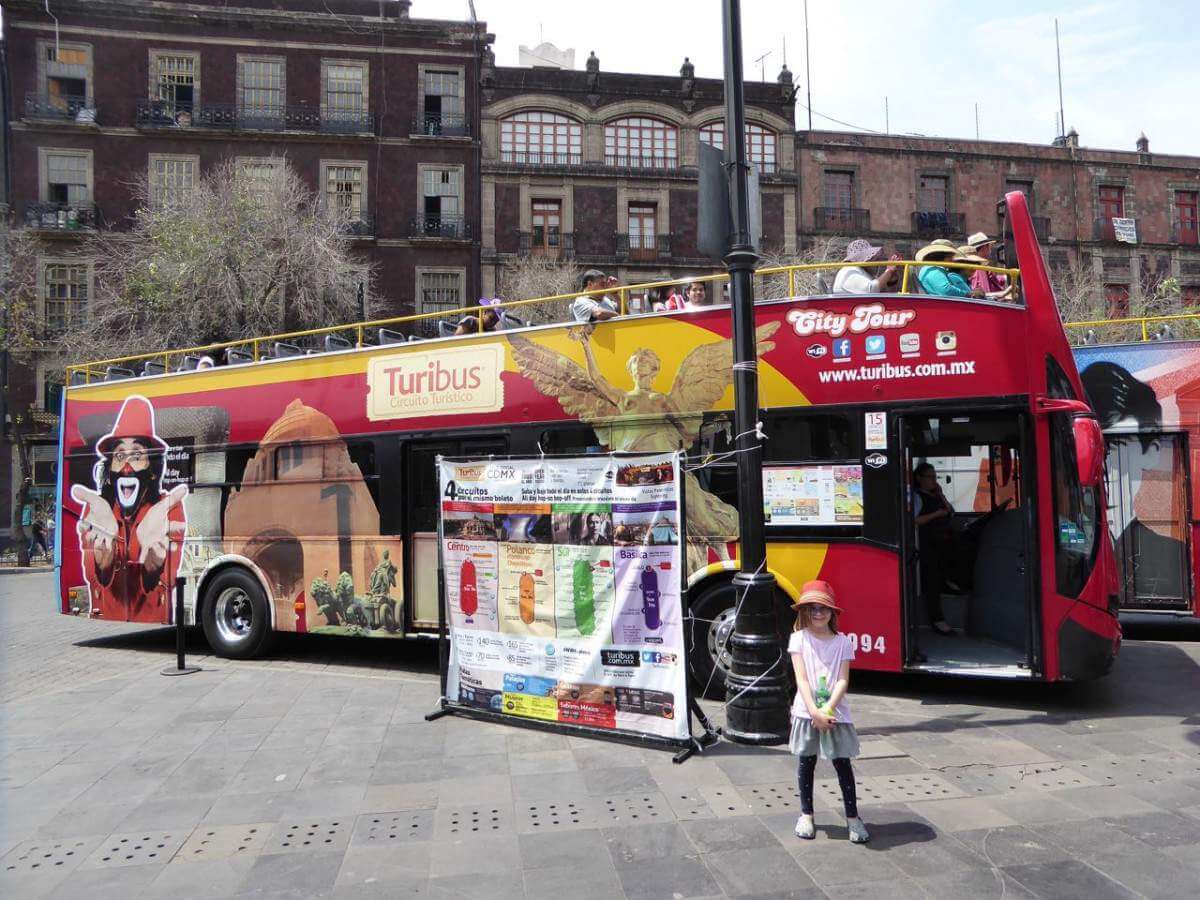 El Centro Histórico, literally meaning the Historic Centre, has been the heart of Mexico City since Aztec times. The enormous Plaza de la Constitución, also known by its less formal name El Zócalo, is one of the largest city squares in the world and was the main ceremonial centre of the Aztec capital of Tenochtitlan. This neighbourhood is jam-packed with historical sights and you could spend days here exploring. Some of our favorite spots include El Templo Mayor, the Great Temple belonging to the Aztecs. Only ruins remain today but the gory history keeps kids captivated and the accompanying museum showcases all the objects unearthed during the archaeological dig. You should also head up to the 44th floor of the Torre LatinoAmericana for a bird’s eye view over this vast city. End your day with a visit to El Morro, a lively churreria that’s open 24-hours and sells nothing more than delicious hot chocolate and churros. 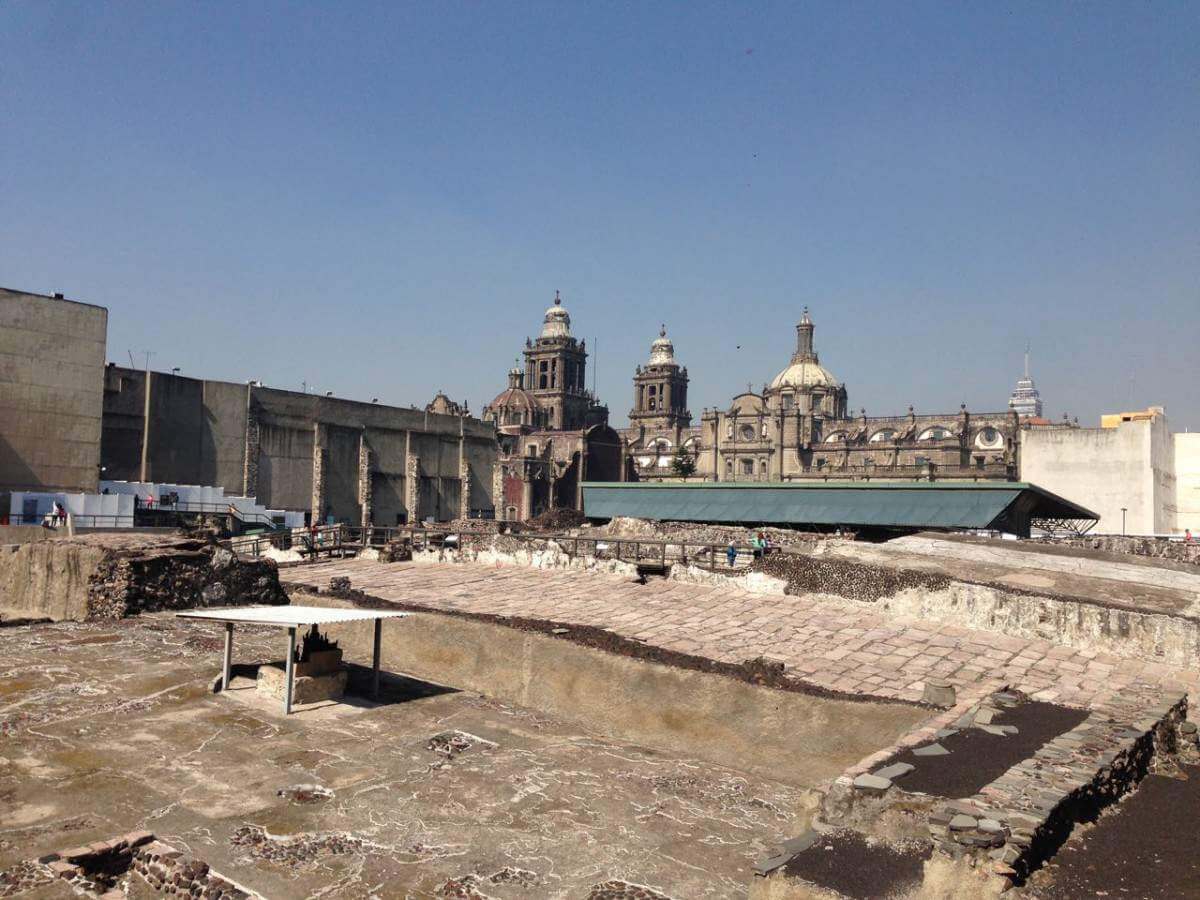 El Templo Mayor with the Catedral Metropolitana in the background.

Otherwise known as the “lungs” of Mexico City, Chapultepec Park spreads over nearly 1,700 acres making it one of the largest parks in the Western Hemisphere. The generous green space is a wonderful place to wander or cycle and is also home to a number of the city’s best kid-friendly attractions. Top of the list is El Papalote, Museo del Niño. This children’s museum is excellent, filled with hands-on, interactive activities that will keep kids busy for hours. Mine love blowing giant bubbles and creating their own animated shorts. Also in the park is the zoo, which first opened its doors in 1924. Amazingly, it’s free to visit, which means that it gets busy at weekends but also that it is accessible to all. There are a couple of playgrounds in the park as well and our favourite is the recently renovated Parque Hormiga that has zip lines and giant spider web climbing frames. 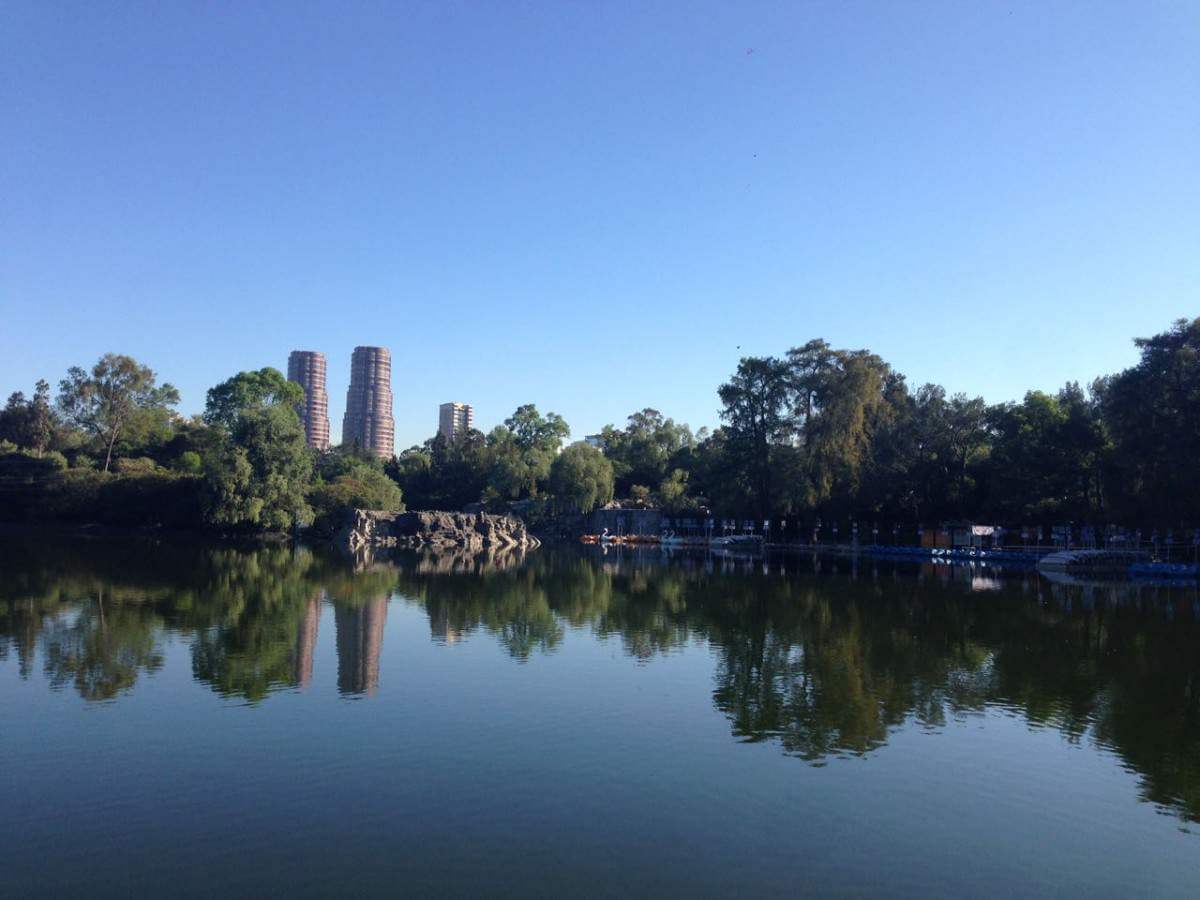 Possibly the most well-known house in the whole of the capital is La Casa Azul (The Blue House), the childhood home of the famous Mexican artist Frida Kahlo. Today, this museum is one of the city’s most popular and is filled with artwork and personal items belonging to Frida and her husband, Diego Rivera. Visitors wander through rooms that once served as living and dining areas as well as the old kitchen before heading upstairs to Frida Kahlo’s studio and her bedrooms (yes, she had more than one!). The museum is very kid-friendly and my children find both her and her home fascinating. Make sure to buy your tickets online before visiting, queues can be long. 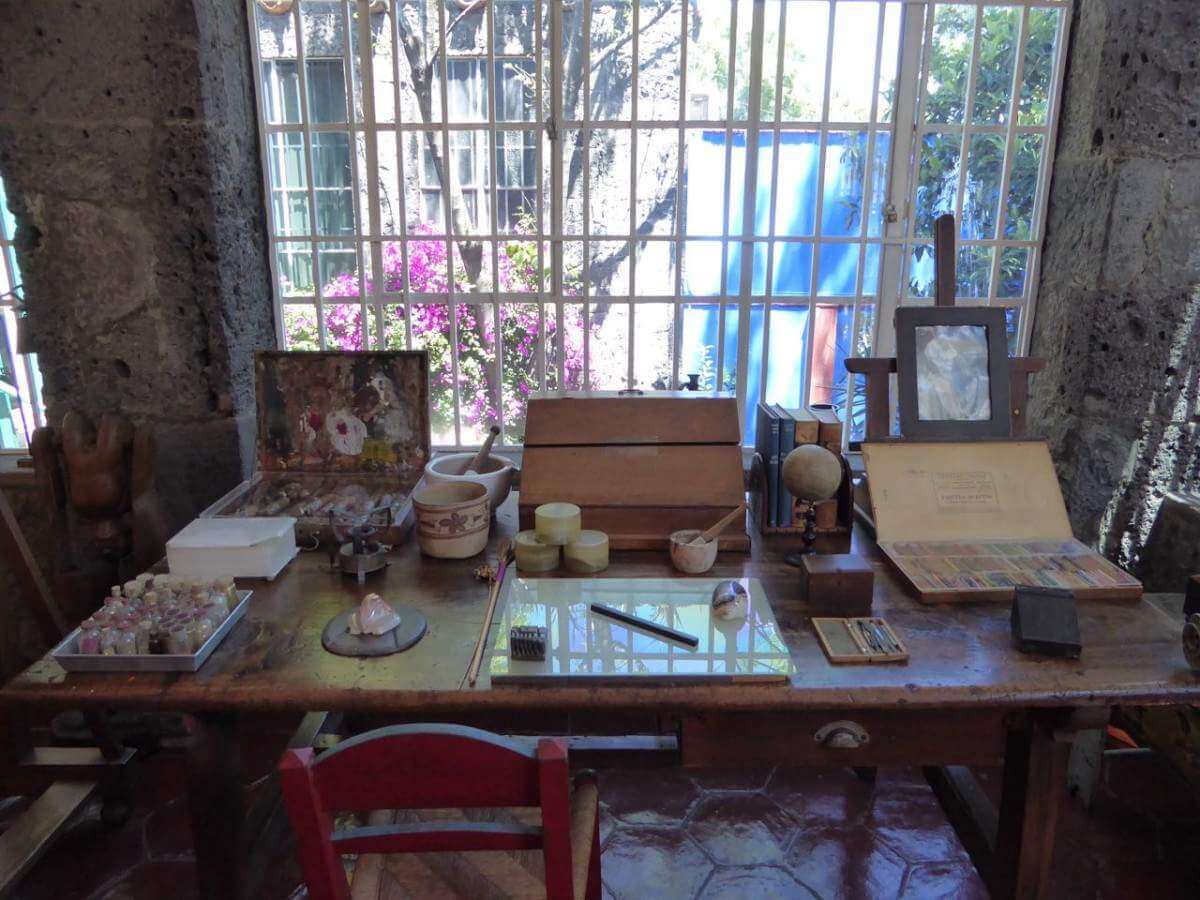 Mexico City wasn’t always the urban sprawl that it is today; in Aztec times the Valley of Mexico was a huge lake system connected by canals and waterways. The only place to catch a glimpse of this pre-Hispanic Mexico today is in the southern neighbourhood of Xochimilco. This is where you’ll find large, colourful trajineras (a kind of Mexican gondola) floating along canals filled with families and friends who arrive by the dozen at weekends. Alongside them glide boats carrying Mariachi bands and small canoes selling quesadillas and beers. This is truly a fun-filled day out and a wonderful activity for families. 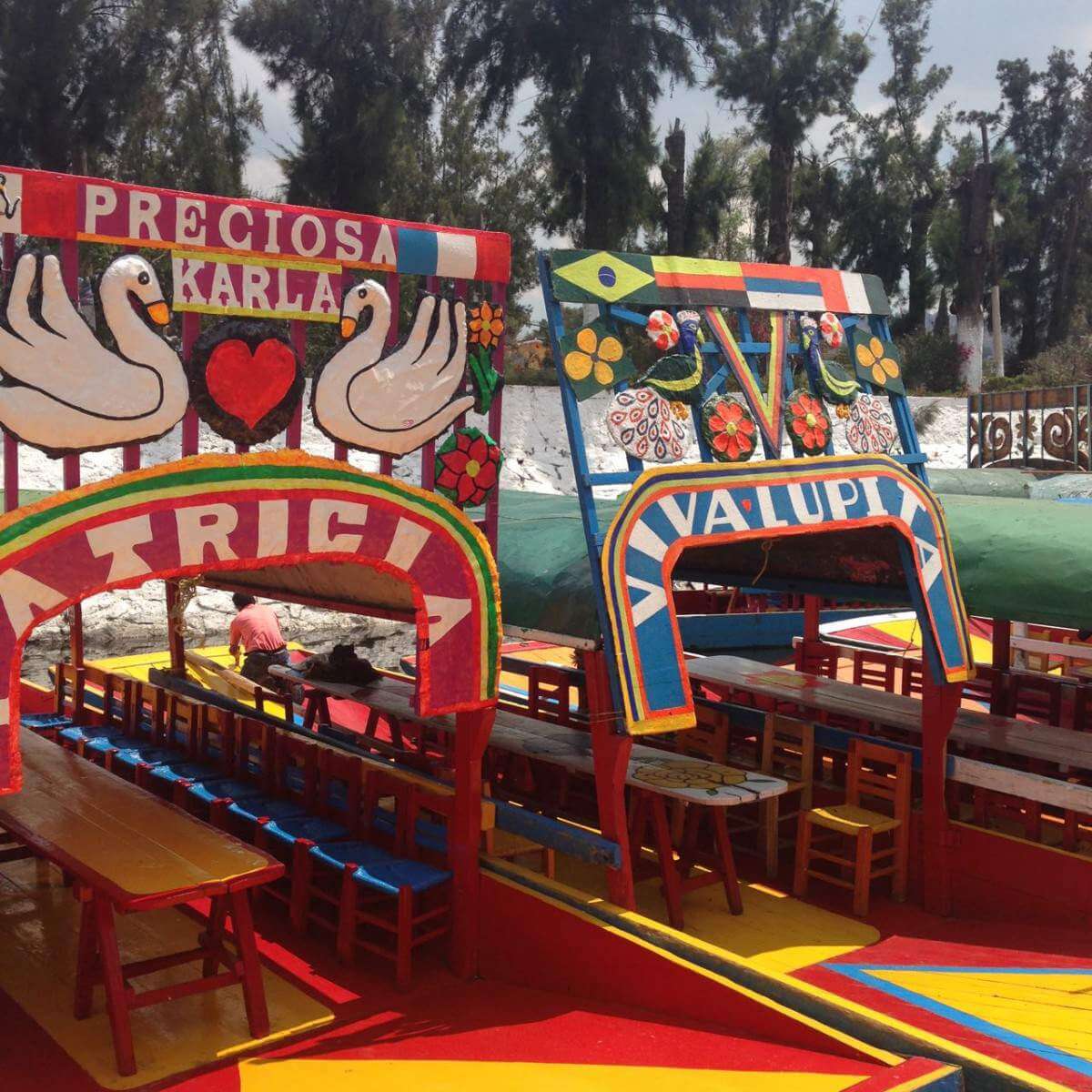 Katja is the co-founder of globetotting.com, a website for adventurous family travel. She is a firm believer that you can – and should! – take your children everywhere and anywhere no matter what age they are. Prior to life on the road with kids, Katja wrote across a range of titles for Lonely Planet and tried and tested luxury hotels for the British boutique hotel guide Mr & Mrs Smith. She has spent the last 12 years living abroad, most recently in Mexico City with her husband and three children. They are about to make the big move back to the UK. Follow her on Twitter: @globetotting and Facebook: globetotting.