On our recent trip to Scotland, one of the main things my husband and I wanted to do was take an Outlander tour. If you’re not familiar with the Outlander book series by Diana Gabaldon or the Outlander TV series on STARZ, you’re missing out. Andrew of Highlander Tours leads an awesome Outlander tour in Scotland. Even if you’re not a fan of the show, you shouldn’t miss a day out exploring these historic sights.

I spent a fair amount of time researching Outlander filming locations and narrowing down the places we wanted to see. I came across Highlander Tours in a Facebook group. Several people recommended their Outlander tour in Scotland and said it was appropriate for kids. (Mine have never seen the series). I connected with Andy and arranged for a day trip from Edinburgh to see the Outlander locations. 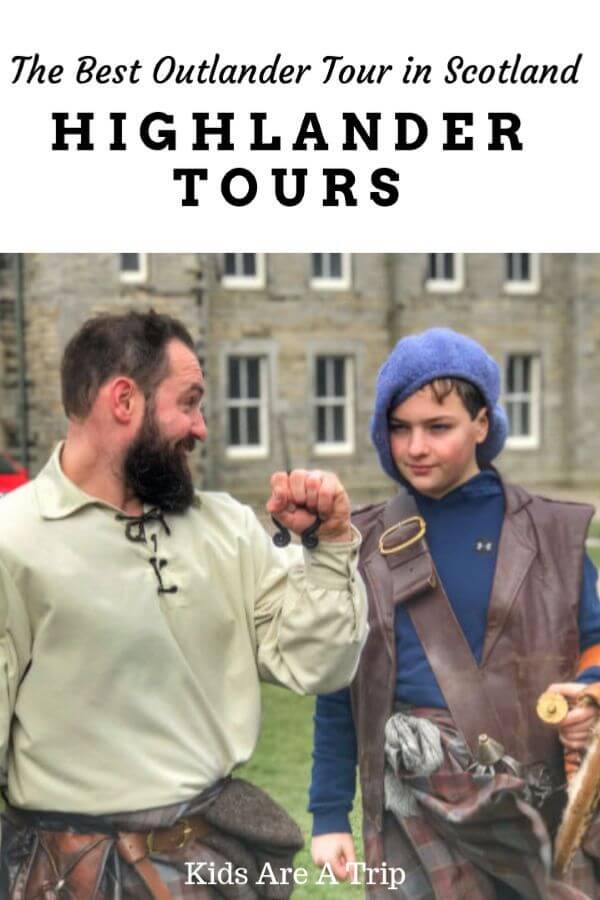 Here is a quick synopsis of the Outlander show. Claire Randall (Caitriona Balfe) is a nurse who is reunited with her husband Jack after World War II. The couple takes a post-war escape to Inverness (Falkland in reality) where Claire stumbles upon Craigh na Dun (Kinloch Rannoch), the stone circle that transports her back to 1743. During her time travels she meets Captain “Black Jack” Randall (Tobias Menzies), her husband’s ancestor, and Jamie Fraser (Sam Heughan), her future love interest. I don’t want to give too much away, but that is the beginning of this beautiful Scottish romance that transcends time and space. If you haven’t seen it, move it to the top of your binge watching queue.

The Best Outlander Tour in Scotland

*Disclosure: We were guests of Highlander Tours for the purpose of this review. As always our opinions are 100% our own. This post may contain affiliate links, which means we may receive a commission if you click a link and purchase something that we have recommended. Please check out our disclosure policy for more details. Thank you for your support!

When the day of our tour arrived, Andy showed up in full Jacobite gear on the doorstep of our Edinburgh apartment. Our boys had huge smiles across their faces, seeing Andy in full costume, including his traditional kilt. We went over plans for the day and set off on our way.

Blackness Castle lies on the Firth of Forth, about thirty minutes outside Edinburgh, and it was our first stop. During the ride, Andy told us his background from life as an electrician to acting and having roles in seasons 2 and 3 of Outlander.

Once we arrived at Blackness Castle everyone piled out of the van and Andy started to unload gear from the back. The day was super windy, but Andy wanted to show the boys how to dress and fight like redcoats and Jacobites in the 18th century.

Our oldest and youngest were the first to suit up in costume, dressing as redcoats. Then my husband and I watched Andy as he took a large swatch of tartan and deftly turned it into a kilt. He proceeded to make another kilt for our middle son and I dressed in the Fraser tartan. All of the boys learned how a musket worked and some basic sword fighting skills. Andy also shared the history of the Jacobites and redcoats and the Battle of Culloden, and the kids were very interested the entire time. 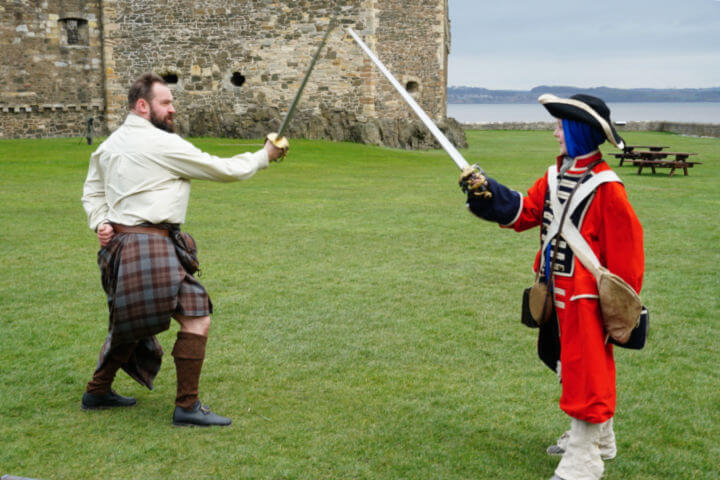 Blackness Castle was built in the 15th century for the Crichton family and the castle was converted in the 16th century to a fortification by James V. In 1650, Oliver Cromwell’s forces attacked the castle and they were forced to surrender. The castle is referred to as “The Ship that Never Sailed” since it looks like a ship that has run aground. This is one of the main Outlander locations from season one, as it was the stand in for Fort William, Black Jack Randall’s garrison. Our boys didn’t understand the Outlander connection, but they loved exploring the castle ruins. 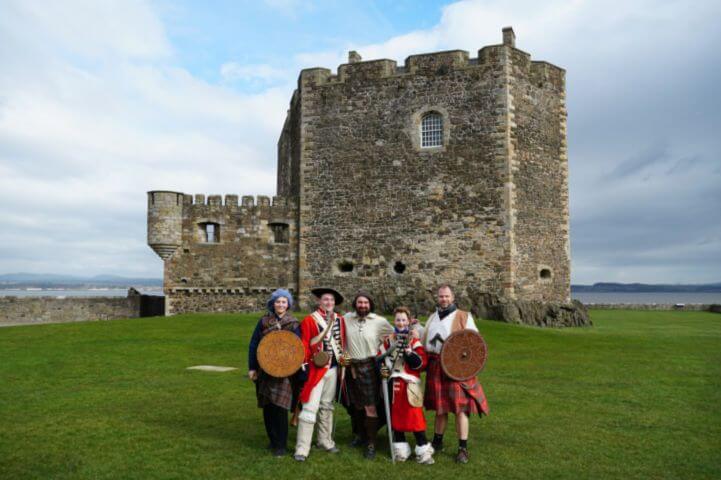 Such a fun experience at Blackness Castle!

Next Up: Doune Castle

Our next stop was Doune Castle, a medieval stronghold built by the Duke of Albany in the 14th century near the city of Stirling. Inside the castle ruins you will find a stunning banquet hall and the Lord’s Hall, complete with a musicians’ gallery and one of the largest fireplaces I’ve ever seen.

The castle has been the filming location for the movies Monty Python and the Holy Grail and Ivanhoe. It was also where they shot the Winterfell scenes for Game of Thrones. Outlander fans will recognize Doune Castle as Castle Leoch, the home of Colum MacKenzie. 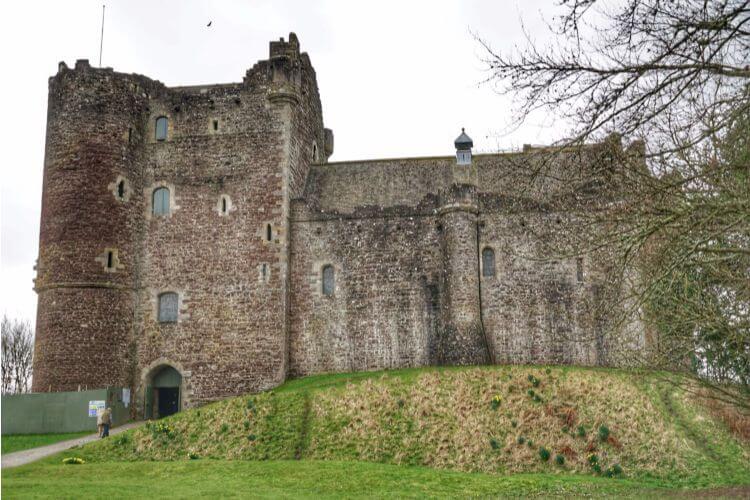 After we finished touring the castle, Andy took us to explore a hiding spot and the creek that ran through the back of the castle grounds. The boys engaged in a rock skipping competition, and Andy joined in the fun. Everyone was laughing and enjoying time outdoors and I think the kids would have stayed all day if we let them.

Five minutes from Doune Castle is Deanston Distillery. This distillery also has a restaurant, and we enjoyed a lovely meal of hamburgers, sandwiches, and salads. Scotch whisky distillery tours are available and there’s a souvenir shop where you can buys gifts to take home.

The town of Culross (pronounced Coo-Ross) is one of those delightful Scottish villages you never want to leave. Located on the Firth of Forth about 25 minutes outside of Edinburgh, the town is charming with its white washed, red tiled roof buildings, and cobblestone streets. A visit to Culross is like stepping back in time.

When we arrived, the first thing the kids wanted to do was head down to the beach, but it wasn’t easily accessible (and it was cold). They opted instead for the adjacent playground, and while they entertained themselves, we learned a bit about the town’s history from Andy. 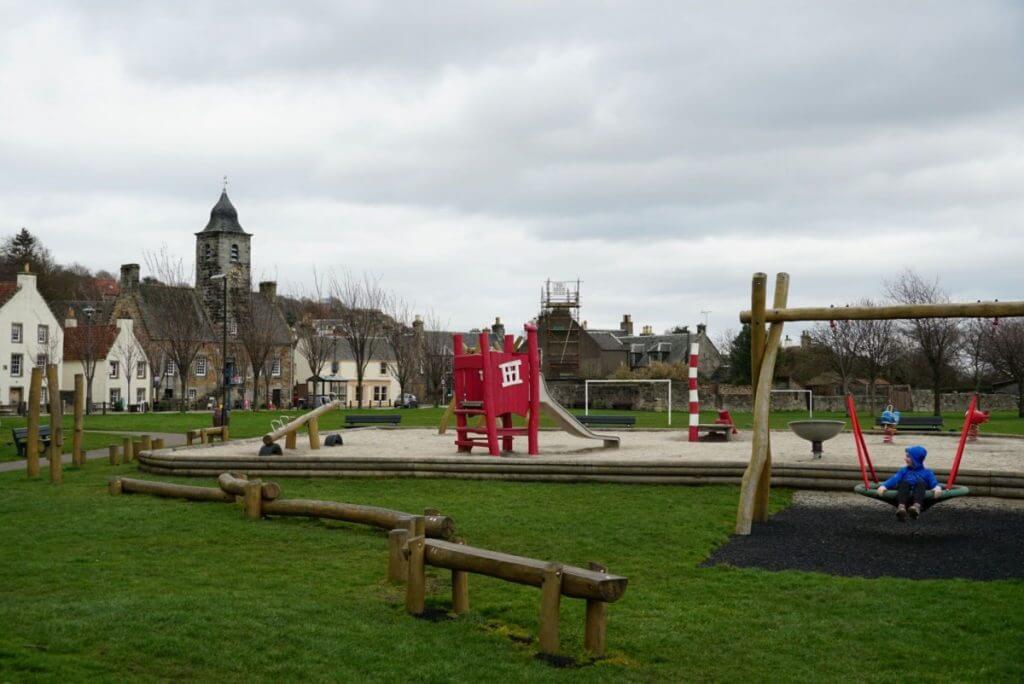 Culross was an important religious center in the 6th century, as the monk, St. Mungo was born here. After he passed away, a group of monks settled here and eventually, Culross Abbey was built in the 13th century by the Earl of Fife. The abbey is situated up a steep cobblestone road overlooking the village of Culross.

The main attraction in the town is Culross Palace. It stands out from everything else, because it is painted a mustard yellow hue instead of bright white. The palace was built in the early 17th center for Sir George Bruce, a descendant of Robert the Bruce. Unfortunately the palace was not open for tours on the day of our visit, but it is well known for its beautiful interiors and painted ceilings. 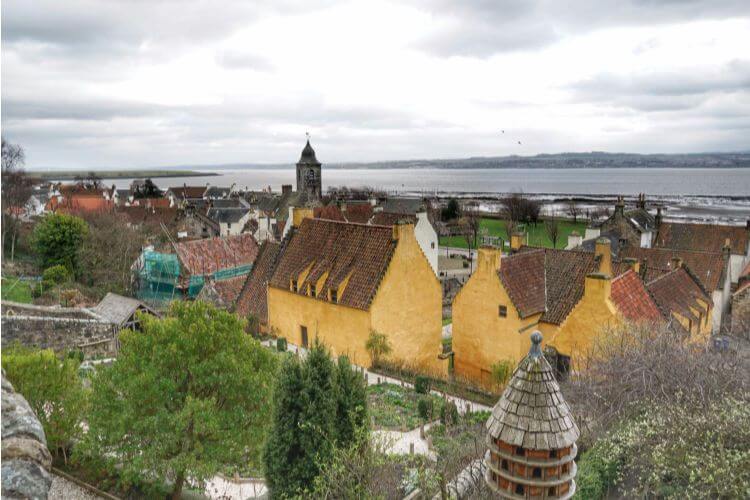 The beautiful Culross Palace and its gardens.

There are several Outlander filming locations in Culross. The gardens of Culross Palace were the herb gardens of Castle Leoch in season one. The inside of the palace was used in season 2 for several scenes and in season 4 the interior was used to film Laoghaire MacKenzie’s home. We also visited the home of Geillis Duncan and Mercat Cross in the center of Culross where Geilliss is sentenced to death for being a witch.

Our final stop was a visit to the gallery of Graham Harris Graham, an award winning photographer who lives in Culross Town Hall. Not only is this a space for Graham to showcase his stunning landscape photography, it’s a place he calls home. He spent some of his time telling us about the building’s history and showing us the old court room. It was quite fun to listen to his stories.

Why we loved this Outlander tour

First of all, Andy planned the perfect Outlander tour with kids, with an equal amount of show information, historical facts, and fun for everyone. Our kids thought this was a perfect day trip from Edinburgh.

Andy also brought the most important things for our kids: weapons and snacks. What group of boy wouldn’t want to learn how to fight with swords and firearms? He also had a huge box of snacks and I am embarrassed to admit my kids did quite a number on that box. However, it just shows you how prepared Andy was for my group of hungry boys.

Andy was super easy to work with, from beginning to end. He is extremely outgoing and shares a lot of his tales from the Outlander set and even plays music from the Outlander soundtrack for guests to enjoy. The one thing he does that I really love is that he sells Highlander gear in the Fraser, MacKenzie, and Outlander plaid. Everything from scarves to bow ties! And if you’re up for it, make time for a dram of whisky, he has all sorts to try. I honestly can’t say enough good things about our Highlander Tour, my only regret is that we didn’t make it to Midhope Castle (Lallybroch is Jamie’s ancestral home in the show), but it is seasonal and not open between Christmas and April 1. Guess that means we will have to go back again!

PIN IT FOR LATER 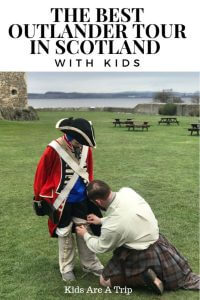 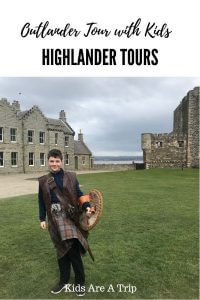