The weather is heating up, and with summer just around the corner, we’ve compiled 15 great books for summer vacation that will make you laugh and cry, dream and hope, and escape reality as needed. Find one of these books that is calling your name, grab a beach towel, your sunglasses, and some sunscreen, and head outside for some rest and relaxation. You know you deserve it. 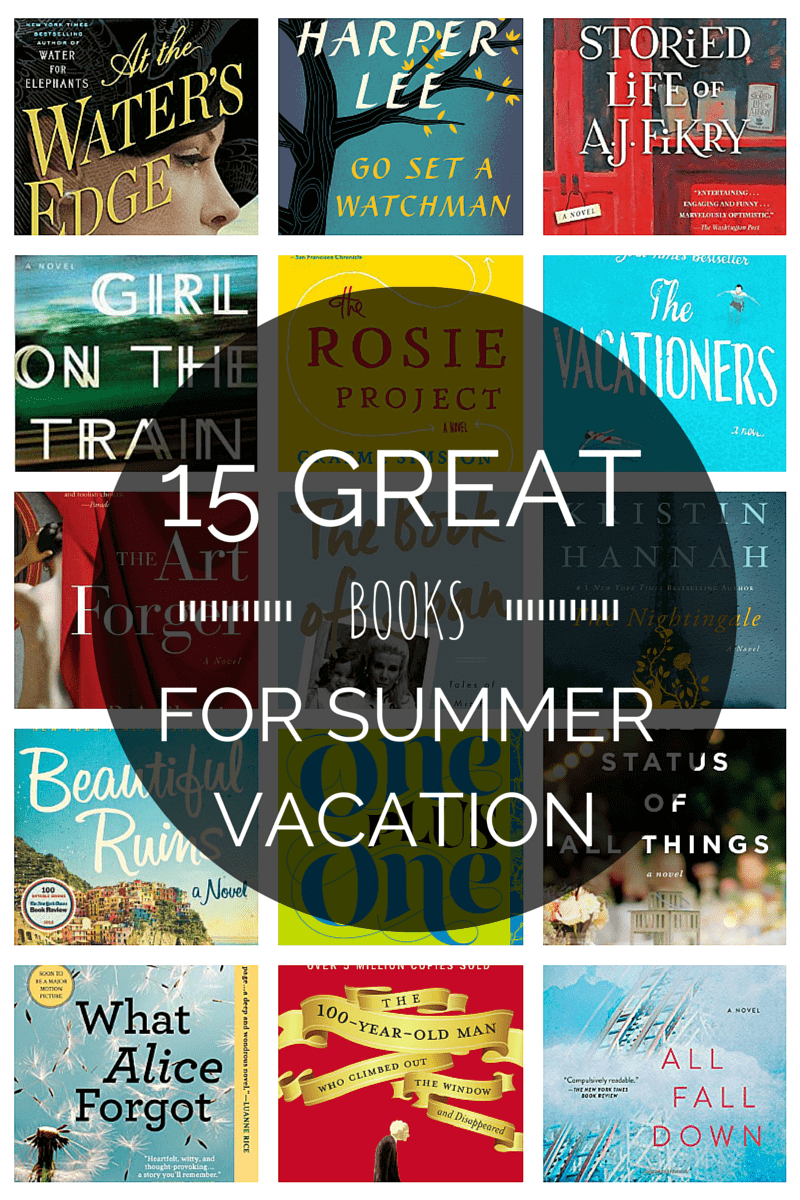 1. All Fall Down by Jennifer Weiner

By all appearances, Allison Weiss has the perfect life. A beautiful family, a job she loves, and a big house in the suburbs. One day, while waiting in the pediatrician’s office, she opens a magazine to a quiz about addiction and starts to wonder…Is a Percocet at the end of the day really different from a glass of wine? Is it such a bad thing to pop a Vicodin after a brutal Jump & Pump class…or if your husband ignores you? She tells herself that the pills help her make it through her days, but the addiction may end up costing her everything.

2. The Nightingale by Kristin Hannah

The Nightingale is the story of two sisters, Vianne and Isabelle, living in Nazi occupied France during World War II, fighting for survival in a dangerous time. Each one embarks on her own dangerous path toward survival, love, and freedom in this beautiful novel that celebrates the resilience of the human spirit and the strength of women. Based on a true story.

3. What Alice Forgot by Liane Moriarty

I have to say I love every book I have read by Liane Moriarty (The Husband’s Secret, Big Little Lies) and this one did not disappoint. What would happen if you woke up one day and didn’t remember what happened the last ten years of your life? That’s what happens to the main character, Alice, when she suffers a fall at the gym and wakes up with amnesia. The head injury caused her to forget that she is 39, with three children, and in the middle of a divorce. She now believes she is 29, pregnant, and happily married. Funny and clever, Liane Moriarty has another great book with this one.

I know this is an older book, but if you haven’t read this, you’ll want to make a point to read it this summer. This is the story of an almost-love affair between an Italian inn keeper and a Hollywood starlet that begins on the Italian coast in 1962…and is rekindled in Hollywood fifty years later. Charming characters and witty dialogue with a beautiful love story make this a perfect summer read.

5. Book of Joan: Tales of Mirth, Mischief, and Manipulation by Melissa Rivers

Joan and Melissa Rivers had one of the most celebrated mother-daughter relationships of all time.  If you think Joan said some outrageous things to her audiences as a comedian, you won’t believe what she said and did in private. Her love for her daughter knew no bounds—or boundaries, apparently. This book promises to make you laugh and cry, and I can imagine it will make you reflect on your relationship with your own mother. I’m looking forward to reading it this summer.

6. One Plus One by JoJo Moyes

JoJo Moyes never seems to disappoint (Me Before You, The Girl You Left Behind), and the same is true with this novel. Jess, is a single mom raising her teenage stepson and math genius daughter, trying to find a way to afford a once in a lifetime opportunity for her daughter to attend a private math academy. A knight in shining armor appears in the form of Ed, a troubled tech millionaire, who offers to drive the family to Scotland so the daughter can take an exam to enter the school. The book really tugs at your heart strings and makes you want to keep reading right to the very end.

7. The 100-Year-Old Man Who Climbed Out the Window and Disappeared by Jonas Jonasson

I call this book the Swedish version of “Forrest Gump”, because literally the main character, Allan Karlsson, has lived an amazing life similar to Tom Hanks’ character in the movie. Bored by his life in the nursing home, Allan escapes out a window on his 100th birthday and the town’s police begin to look far and wide for him once they find out he has boarded a bus at the local station. Allan shares his life story throughout the novel, including his travels and meetings with Churchill and Stalin, charming his new friends and readers along the way. I didn’t know what to expect when I picked up this book, but it didn’t disappoint.

8. The Girl on the Train by Paula Hawkins

From her seat on the train, troubled alcoholic Rachel watches the world go by and invents stories about the people she sees every day through the window. She creates imaginary names for one of the couples she sees daily, “Jason” and “Jess”, and manufactures a fairy tale life for them, which quickly evaporates when “Jess” goes missing. With twists and turns, and unexpected suspects, this thriller will have you guessing to the end.

9. The Vacationers by Emma Straub

If you missed this one on last summer’s “must read” book lists, you’ll want to try it this year. An American family (and their friends) have decided to spend two weeks in Mallorca to celebrate the parents’ 35th wedding anniversary, and the typical dysfunction that tends to occur on family vacations begins to unfold. As you can imagine, when everyone is under one roof, they start to learn one another’s secrets, and it reads like a giant soap opera! The book is charming and funny, and the descriptions of Mallorca made me want to visit, which for me, is the sign of a great beach book.

10. At the Water’s Edge by Sarah Gruen

A trio of young Philadelphia socialites head to Scotland during World War II. One of the main characters, Ellis, is on a mission to prove himself to his father, and heads off to find the Loch Ness monster with his wife Maddie. Maddie doesn’t know what to make of their new home and life in Scotland, and finds that the locals are not as welcoming as she had hoped. As the book develops, Maddie finds her marriage unraveling as she realizes she may not be the woman she was when the journey began.

11. The Storied Life of A.J. Fikry by Gabrielle Zevin

A. J. Fikry’s life is not at all what he expected it to be. He lives alone after the sudden passing of his wife, his small town bookstore is failing, and now his prized possession, a rare book of Poe poems, has been stolen. At the same time as the book’s disappearance, a mysterious package appears at the bookstore. Its unexpected arrival gives Fikry a new lease on life and re-write his personal story. This book is quirky and charming, light hearted and made me smile and cry at the same time.

12. The Rosie Project by Graeme Simsion

Don Tillman is a brilliant, yet socially inept professor of genetics who has decided it’s time he found a wife. In the orderly, evidence-based manner with which Don approaches all things, he designs the Wife Project to find his perfect partner: a sixteen-page, scientifically valid survey to filter out the drinkers, the smokers, the late arrivers. Rosie Jarman possesses all these qualities. Don easily disqualifies her as a candidate for The Wife Project (even if she is “quite intelligent for a barmaid”). Don finally realizes in the end, that sometimes you don’t find love, it finds you. I have several friends who have read this book and loved it, so it’s on my “to read” list this summer.

Almost twenty-five years after the infamous art heist at the Isabella Stewart Gardner Museum (still the largest unsolved art theft in history) one of the stolen Degas paintings is delivered to the Boston studio of a young artist. Claire Roth has entered into a scandalous deal with a powerful gallery owner by agreeing to forge the Degas in exchange for a one-woman show in his renowned gallery. As she begins her work, she starts to suspect that this long-missing masterpiece may actually be a forgery. This book is a true page turner that kept me up late at night because I wanted to see how it would end!

14. The Status of All Things by Liz Fenton and Lisa Steinke

What if you could rewrite your history by changing your Facebook status? Kate is a thirty-five-year-old woman who is obsessed with social media. When her fiancé breaks things off at their rehearsal dinner she wants to share it on Facebook, but things have started to change. Somehow, her real life has started to mirror her Facebook status. With the power of the internet at her fingertips, Kate goes back in time to try and rewrite history to create the picture perfect life she always imagined. What’s not to love about the idea behind this book? I can’t wait to get my hands on a copy!

This novel is the earliest known work of Harper Lee, author of To Kill A Mockingbird. The book features the same cast of characters from the Mockingbird novel, only twenty years later, with Scout returning to her Alabama home to visit her father Atticus. One of the most highly anticipated novels in a long time, it will be interesting to see how it is received.

We are a participant in the Amazon Services LLC Associates Program, an affiliate advertising program designed to provide a means for us to earn fees by linking to Amazon.com and affiliated sites. © Kids Are A Trip 2020. All Rights Reserved. Design by Alpine Lane
53shares